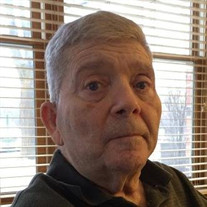 LYLE PHILIP HILD 1935 - 2019 Lyle Philip Hild age 83 of Plattsmouth, NE passed away on Tuesday, January 8, 2019 at the Louisville Care Center in Louisville, NE. He was born on September 18, 1935 to Verner William and Eunice Elizabeth (Hennings) Hild in Omaha, NE. Lyle was raised and worked as a farmer on his family’s farm southwest of Plattsmouth. He attended District #25 Country School. He graduated from Plattsmouth High School with the class of 1953. He met Jean Maxine Porter and they were later married on February 1, 1959 at Christ Lutheran Church in rural Louisville. Lyle and Jean made their home and raised their daughters on the Hild Family Farm. After Lyle retired they moved to Plattsmouth and in January of 2018, due to his failing health, he resided at the Louisville Care Center. He was a member of the Army National Guard in Plattsmouth for nine years. Lyle is survived by his wife: Jean Hild of Plattsmouth, NE, three daughters: Christine Hutchison and husband Randy of Plattsmouth, NE; Barbara Glaze and husband Greg of Grand Island, NE; Sandra Jackson of Omaha, NE; five grandchildren: Amy Hutchison, Cory Hutchison and wife Amanda, Kelly Jo Duncan and husband Josh, Brandi Jackson, and Kayla Glaze; four great grandchildren: Alexis Glaze, Cora Hutchison, Logan Burnham and Macie Duncan; numerous nieces, nephews, cousins, and many friends. He was preceded in death by his parents: Verner and Eunice Hild and his sister Joy Bond. Visitations will be held from 1:00 to 8:00 P.M., with the family greeting relatives and friends from 6:00 to 8:00 P.M., on Thursday, January 10, 2019 at Roby Funeral Home in Plattsmouth. A Celebration of Life will be held at 10:30 A.M. on Friday, January 11, 2019 at Roby Funeral Home in Plattsmouth with Vickie Bowen as celebrant. The Pallbearers will be Dan Derner, Gene Meier, Steve Murnan, Bruce Nolte, Lance Ross, and Brian Wagner. The Honorary Pallbearers are Lyle’s Grand Kids Amy Hutchison, Cory Hutchison, Kelly Jo Duncan, Brandi Jackson, and Kayla Glaze. His Final Resting Place will be at Oak Hill Cemetery in Plattsmouth. Memorial to the Family (a suitable charity will be chosen at a later date). Services are entrusted to Roby Funeral Home, 346 Ave. A, Plattsmouth, NE 68048 (402) 296-3123 robyfuneralhome.com

The family of Lyle Philip Hild created this Life Tributes page to make it easy to share your memories.

Send flowers to the Hild family.