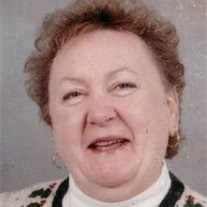 LYNN GABRIEL ANN BRYANT 1945 - 2014 Lynn Gabriel Ann (Perrelet) Bryant age 69 of Plattsmouth, NE passed away on Friday, November 21, 2014 at the Bellevue Medical Center in Bellevue, NE. Lynn was born on March 15, 1945 to Henry Tell and Gabriel Anna Frances (Belle Isle) Perrelet in Onaga, KS. In 1950, she moved with her family to Plattsmouth where she was raised and schooled. Lynn graduated from Plattsmouth High School with the class of 1963. Lynn met Jimmie Alpha Bryant and they were later married on December 26, 1963 at First Christian Church in Plattsmouth, NE. Lynn and Jimmie made their home in Plattsmouth, but while Jimmie was in the US Army they had lived in Germany for two years and in Virginia for a year. They returned to Plattsmouth in 1967 and have been here since. She had worked at Mutual of Omaha, A.F.E.E.S. at Offutt Air Force Base in Bellevue, NE, and the Nebraska Masonic Home in Plattsmouth. Lynn had also worked at the Huntington Park Care Center in Papillion and for Plattsmouth Public Schools. She was a member of First Christian Church, Christian Women Fellowship, Fraternal Order of Eagles Aerie #365 Auxiliary, Hugh J. Kerns American Legion Post #56 Auxiliary, and the Red Hat Society all of Plattsmouth. Lynn is survived by her husband: Jimmie Bryant of Plattsmouth, NE, daughter: Heather Otte of Plattsmouth, NE, son: Scott Bryant and husband David Etmund of Omaha, NE, granddaughter: Rowan Otte of Plattsmouth, NE, brother: Ross Perrelet and wife Dottie of Fargo, ND, numerous nieces, nephews, cousins, and many friends. She was preceded in death by her parents: Henry and Ann Perrelet, brother: Tell Perrelet, and sister: Joan Presnall. A Funeral Service will be held at 10:30 A.M., Tuesday, November 25, 2014 at First Christian Church in Plattsmouth with Pastor Michael Lincoln officiating. Visitations will be from 1:00 to 9:00 P.M., with family greeting relatives and friends from 6:00 to 8:00 P.M., Monday, November 24, 2014 at Roby Funeral Home in Plattsmouth. Pallbearers will be David Etmund, Michael Hart, Tim Otte, Tom Otte, Ton Rundquist, and Mike Scofield. Interment will be at Oak Hill Cemetery in Plattsmouth. The family suggests memorials to First Christian Church.

The family of Lynn Gabriel Ann Bryant created this Life Tributes page to make it easy to share your memories.