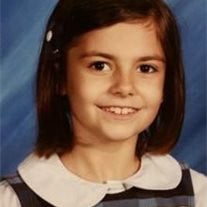 MADELYN EBETINO SHUMAKER 2007 - 2015 Madelyn "Maddie" Ebetino Shumaker age 8 of La Vista, NE passed away peacefully on Thursday, December 10, 2015 at her residence. She was born on February 17, 2007 to Jesse Laten and Corrie Ebetino (McDaniel) Shumaker in Omaha, NE. Maddie attended Brownell-Talbot School in Omaha from pre-school through the third grade. Maddie was as energetic, funny, curious, and smart a child as was ever created. All who met her, loved her, and were loved in return. Maddie liked horseback riding, summer camp, rock-climbing, and downhill skiing. She loved painting, music, crafts and table games. Her two favorite games were Apples to Apples and Catch Phrase. Over Maddie's short life she was on the Brownell-Talbot Lower School swim team, played soccer, basketball and tennis, and loved attending high school athletic events. She also enjoyed participating in gymnastics, dance, and piano. She truly loved all animals and debated which occupation would provide the most contact with them. Maddie traveled extensively: Iceland, Ireland, Michigan's Upper Peninsula, NYC, RV'ing in the Black Hills, and of course, the pilgrimage to Orlando. She was a natural leader and would organize many of her classmates to do fun projects together such as the Beanie Boo wedding, and a class party (to the surprise of the teacher). Maddie had the warmest heart and a deep soul. We witnessed her compassion grow this year as she got to know many children battling cancer. Even with her extensive interests, her family remained the center of her world. Over the last two months, Maddie planned and made Christmas gifts for her family, despite her setbacks. Despite her young age, she understood the concept of heaven and was prepared for it. Her greatest loves, after her family, were Pandas, her friends at Brownell-Talbot, her cat, Titan and her fish, Rosie. Maddie will remain an inspiration to all who have been touched by her. In The Little Prince, Antoine Saint Exupery concludes, "In one of the stars I shall be living, in one of the stars I shall be laughing. And so it will be as if all of the stars are laughing when you look at the stars at night." Astronomy tells us that the light from many of the stars we see at night comes from stars that have since ceased to live in their prior state. Some people are like that, their light continues to shine long after they leave this life. We live in a borrowed world, lighted in part by those that are no longer here. Therefore, all we can do is try to leave this place a little better off. Maddie made the world a better place and continues to the light the way for all of us. Maddie is survived by her parents: Jesse and Corrie Shumaker of La Vista, NE; maternal grandmother: Anne McDaniel of Omaha, NE; paternal grandparents: David and Regina "Genie" Shumaker of Omaha, NE; two aunts: Tessa Janssen and husband Matt of Sidney, NE; Kelly Shumaker of Omaha, NE; uncle: Morgan Shumaker of Omaha, NE; maternal great grandparents: Frank and Betty Ebetino of Venice, FL; Clyde and Harriet McDaniel of Okemos, MI; paternal great grandmother: Patricia Goodell of Omaha, NE; two cousins: Skyler and Lydia Janssen, and many other family and friends. She was preceded in death by her maternal grandfather: Rev. Martin McDaniel, paternal great grandfather: Frank Goodell, and paternal great parents: Laten Shumaker and Carolyn Davis. Visitations will be held from 4:00 to 7:00 P.M., Monday, December 14, 2015, at Dundee Presbyterian Church in Omaha, NE. A Funeral Service will be held at 10:30 A.M., Tuesday, December 15, 2015 at Dundee Presbyterian Church in Omaha with Rev. Michael Elliott and Rev. Dr. Jeff McDonald officiating, Wayne Kallstrom as organist, and the Brownell-Talbot Upper and Lower School Choirs. The pallbearers will be Morgan Shumaker, David Shumaker, Matt Janssen, James McDaniel, Michael McDaniel, Nick Ziegler, Michael Borys, and Shelby Bell. Final Resting Place will be next to Grandpa Marty in Rock Bluffs Cemetery in Plattsmouth, NE. The family suggests memorials to The Cure Starts Now Foundation (thecurestartsnow.org or https://curestartsnow.z2systems.com/np/clients/curestartsnow/campaign.jsp?campaign=329&).

The family of Madelyn Ebetino Shumaker created this Life Tributes page to make it easy to share your memories.

Send flowers to the Shumaker family.