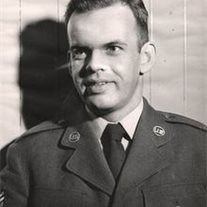 CMSGT. MARCUS WILLIAM BRYANT 1929 – 2018 CMSGT. Marcus "Marc" William Bryant age 88 of Plattsmouth, NE passed away on Thursday, March 22, 2018 at his residence. Marc was born on September 19, 1929 to Calvin Chester and Jean Lucy (Palmer) Bryant in Oxford, CT. He was raised and schooled in Seymour, CT and he graduated from Seymour High School with the class of 1947. In 1948 Marc enlisted in the US Air Force. Marc met Alyce "Jean" Imogene DeHeart and they were later married on June 14, 1953 in Concord, CA. He proudly served his country for twenty four years and he had been stationed in Germany, Arizona, Nebraska, Vietnam, and Ohio. In 1972, Marc, Jean, and their daughter Marcie settled in Plattsmouth. He was stationed at Offutt Air Base in Bellevue, NE when he retired from the Air Force in 1973. After retiring from the Air Force, Marc worked as an insurance agent for ten years and then Marc worked for Trump Enterprises from 1983 until he retired in 1991. He is survived by his wife of 64 years: Jean Bryant of Plattsmouth, NE; daughter: Marcie Bryant of Plattsmouth, NE; and numerous nieces, nephews, cousins, and many friends. He was preceded in death by his parents: Calvin and Jean Bryant and his four sisters: Iva Hyatt, Lottie Gala, Murriel O'Dell, and Barbara Bukofske. Visitations will be held from 1:00 to 9:00 P.M., with family greeting relatives and friends from 6:00 to 8:00 P.M., Monday, March 26, 2018 at Roby Funeral Home in Plattsmouth. A Funeral Service will be held at 10:30 A.M., Tuesday, March 27, 2018 at Roby Funeral Home with Pastor Belinda Davidson officiating. Military Rites conducted by the Offutt Air Force Base Military Rites Team of Bellevue, NE. His final resting place will be at Oak Hill Cemetery in Plattsmouth, NE. The Family suggests Memorials to Mynard Liberty United Methodist Church. Services are entrusted to Roby Funeral Home, 346 Ave. A, Plattsmouth, NE 68048. (402) 296-3123 robyfuneralhome.com

The family of Marcus William Bryant created this Life Tributes page to make it easy to share your memories.

Send flowers to the Bryant family.