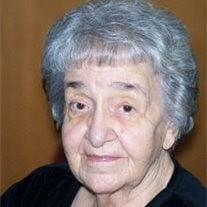 MARGARET LOUISE EHLERS 1928 – 2016 Margaret Louise (Smith) Ehlers age 88 of Plattsmouth, NE formerly of Mission, TX passed away on Monday, September 19, 2016 at The Nebraska Masonic Home in Plattsmouth. She was born on June 17, 1928 to Clark A. and Cora M. (Ryman) Smith in Cuba, KS. Margaret was raised and schooled in Agenda, KS and she attended Agenda Rural High School. She met Eugene "Gene" Walter Ehlers and they were married on April 16, 1944 in Las Vegas, NV. Margaret and Gene made their home in California, Nebraska, Colorado, and Texas, as Gene worked in the construction industry. She was a past Matron of the Order of the Eastern Star Arbor Vitae Chapter #92 of Fremont, NE, a past Matron of Order of the Eastern Star Mission Chapter #527 of Mission, TX, and a past Queen of the Daughters of the Nile Elidad Temple #134 in Corpus Christi, TX. Margaret is survived by her daughter: Gena Brimmer of Mission, TX; granddaughter: Carol Lotspeich of Fort Collins, CO; numerous nieces, nephews, cousins, and many friends. She was preceded in death by her parents: Clark and Cora Smith, husband: Gene Ehlers, two sisters: Elizabeth Henry, Geneva Empson, and three brothers: Hubert, Richard, and Harold Smith. A Memorial Service will held at 1:30 P.M., Wednesday, October 12, 2016 at The Nebraska Masonic Home in Plattsmouth with Pastor Michael McGregor officiating and Chris Abbott as pianist. Eastern Star Service by Order of Eastern Star Home Chapter #189 of Plattsmouth and Daughters of the Nile Service by Daughters of the Nile Sat-Ra Temple #59 of Omaha, NE. Margaret and Eugene's Final Resting Place will be in Fremont, NE. The family suggests memorials to the Shriners Hospitals for Children.

The family of Margaret Louise Ehlers created this Life Tributes page to make it easy to share your memories.

Send flowers to the Ehlers family.