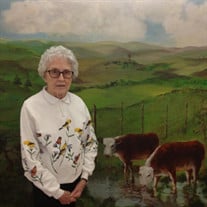 MARGARET ELIZABETH RHYLANDER 1928 - 2021 Margaret Elizabeth (Smith) Rhylander age 93 of Plattsmouth, NE peacefully passed away on Sunday June 27, 2021 at The Nebraska Masonic Home in Plattsmouth. Margaret was born on February 27, 1928, to Royal Percy and Clara Elizabeth (Gobbleman) Smith in Mynard, NE. Growing up, Margaret’s parents farmed in Cass County Nebraska and she attended country school and then Plattsmouth high school, where she was active in Journal Force. She graduated in 1945. In 1947 Margaret met Clayton James Rhylander, and they were married on September 18, 1949 at the Evangelical United Brethren Church at Mynard. Following the ceremony, a reception was held at the church and Peony Park in Omaha, NE. They honeymooned in Colorado Springs, CO, spending the first night at the Cornhusker Hotel in Lincoln, NE. After returning from their honeymoon, they settled in Mankato, MN, where Clayton worked for Northern Natural Gas before they returned to settle in Plattsmouth. They later purchased the house on Clinton St. in Plattsmouth, where Margaret lived for 55 years. Margaret and Clayton had three children: Carl (Kathleen Wright), Dave (Toni) and Julie (Scott Whisler). Margaret also has nine grandchildren: Carli Jo, Clayton, Chase, Carson, Natalie, Cori, Davis, Ellie and Joe. They were married for 38 years until Clayton passed away in 1987. In 2012, Margaret moved into the Masonic home in Plattsmouth, where she resided until passing. She was a longtime member of the Presbyterian Church in Plattsmouth. She was active in the church and a member of the Presbyterian Women. She also regularly participated in the annual chicken pie supper. Her father being a long time Mason, Margaret joined Job's Daughters. Later, when Clayton joined the Masons, Margaret became a member of the order of the Eastern Star, Chapter #189. Margaret was also an active member of the Blue Birds Across Nebraska organization. Margaret worked almost the entirety of her adult life. Prior to marrying, Margaret worked in Omaha in a clerical role. After marriage, she took care of the house and raised three kids while supporting Clayton as the mayor's wife at various social functions. Margaret also served many years as an administrative assistant in the Cass County clerk's office. After retiring from there, Margaret worked weekends at the Masonic home for nearly 15 years. Margaret was active in the community, for 15 years serving as the wife to the Mayor. She regularly worked as an election poll worker during election season. She also volunteered as an usher at The Lofte Community Theater in Manley as well as at the Orpheum Theater in Omaha. She enjoyed a wide range of other interests. She enjoyed needle crafts as well as quilting. But her passion was always nature. Margaret would tell her children of sitting on the roof of the root cellar on her family's farm, simply watching nature, looking for birds, listening for the birds, enjoying the quiet. As a very active member of her bluebird organization, Margaret tended to local bluebird boxes in the area for years, including those that were installed at the Plattsmouth Masonic Home and Oak Hill Cemetery. Her grandchildren remember checking those boxes in the cemetery and singing Happy Birthday. She also participated in various events with the bluebird organization, including birdwatching and bird banding. She loved to hike and be in the outdoors. Margaret also enjoyed traveling in her later years. She would often travel to visit her children and her grandchildren. Later, Margaret traveled to both Alaska and Churchill Canada, where she began to seriously explore a new interest in photography. She enjoyed taking pictures on that trip of not just the landscape, but also birds and the occasional polar bear. She is survived by her children: Carl, Dave, and Julie; nine grandchildren; her sister: Dee Gall; her brother: Roy Smith; numerous nieces, nephews, cousins; and many friends. Margaret is preceded in death by her parents: Royal and Clara Smith and her husband: Clayton Rhylander. Visitations will be held from 5:00 to 8:00 P.M., with an Eastern Star Service at 7:00 P.M., on Friday, July 9, 2021 at Roby Funeral Home in Plattsmouth. A Private Family Graveside Memorial Service will be held at Oak Hill Cemetery in Plattsmouth. In Lieu of flowers, memorials can be made to First Presbyterian Church or The Nebraska Masonic Home Plattsmouth, NE. Services are entrusted to Roby Funeral Home, 346 Avenue A, Plattsmouth, NE 68048 (402) 296-3123 [email protected] www.robyfuneralhome.com

The family of Margaret Elizabeth Rhylander created this Life Tributes page to make it easy to share your memories.

Send flowers to the Rhylander family.