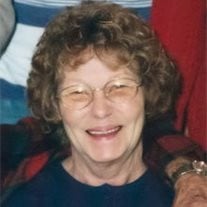 MARILYN JEAN MARCH 1935 - 2014 Marilyn Jean (Koukal) March age 78 of Plattsmouth, NE passed away on Tuesday, April 1, 2014 at the Nebraska Medical Center in Omaha, NE. Marilyn was born on July 15, 1935 to Emil Anton and Edythe Genevieve (Kelly) Koukal in Omaha, NE. She was raised and schooled in Plattsmouth and graduated from Plattsmouth High School with the class of 1952. After high school, Marilyn worked at a pastry shop on Main Street in Plattsmouth, where she met the love of her life, Donald LeRoy March and they later married on December 12, 1953 at St. John's Catholic Church in Plattsmouth. Then she worked as a legal secretary at a law firm in Omaha, NE. Marilyn was a wife, mother, grandmother, and homemaker. After her children were raised, she was a health care worker at the Plattsmouth Manor and later she was as a resident treatment worker at the Glenwood Resource Center in Glenwood, IA until retiring in 1995. She volunteered her time at Church of the Holy Spirit and at the Plattsmouth Senior Center for many years. Marilyn was a lifelong Plattsmouth resident. She is a member of Church of The Holy Spirit of Plattsmouth. Marilyn is survived by her husband: Donald March of Plattsmouth, NE, three sons: Donald J. March & wife Catherine of Stafford, VA, Rick A. March of Bellevue, NE, Michael March & wife Marliss of Omaha, NE, four daughters: Laura Prater of Plattsmouth, NE, Karen Forney & husband Brian of Thurman, IA, Julie Boatwright & husband Tony of Omaha, NE, Linda Sullivan & husband Matt of Plattsmouth, NE, eighteen grandchildren, twenty six great grandchildren, sister: Tress Peterson of Plattsmouth, NE, and numerous nieces, nephews, cousins, and many friends. She was preceded in death by her parents: Emil and Edythe Koukal, infant daughter: Sandra Lee March, and son: Jeffrey Scott March. A Funeral Mass will be held at 10:30 A.M., Monday, April 7, 2014 at Church of The Holy Spirit in Plattsmouth, NE with Father Loras K. Grell officiating, Rick A. March as lector, Tony Salazar and Jim Ulrich as acolytes, Terry Little and Brian Forney as vocalists, Laurie Hajek-Jones as organist, and Ryan Boatwright, Matthew Sullivan, and Anthony Vigneri as altar boys. Visitations will be held from 1:00 – 5:00 P.M., Sunday, April 6, 2014 at Roby Funeral Home. A Rosary Service followed by Vigil will be held at 8:00 P.M., Sunday, April 6, 2014 at Church of The Holy Spirit. Pallbearers will be Donald J. March, Rick A. March, Michael March, Jamie March, Tony Boatwright, and Matt Sullivan. Interment will be at Holy Sepulchre Cemetery in Plattsmouth, NE. The family suggests memorials to Church of The Holy Spirit and/or for Masses.

The family of Marilyn Jean March created this Life Tributes page to make it easy to share your memories.

Send flowers to the March family.