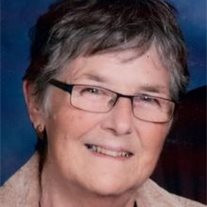 MARILYN ANN SCHUETTE 1939 – 2015 Marilyn Ann (Borovac) Schuette age 76 of Plattsmouth, NE, passed away peacefully surrounded by her family on Saturday, August 1, 2015 at her residence. She was born on January 3, 1939 to John Francis and Mary Margaret (Smith) Borovac in Omaha, NE. Marilyn was raised and schooled in Omaha. She attended Sts. Peter and Paul Catholic School and graduated from Mercy High School with the class of 1957. On her high school graduation day, she met Roger William Schuette on a blind date. Marilyn and Roger were engaged on December 24, 1957 and they married on May 10, 1958 at Sts. Peter and Paul Catholic Church in Omaha. After graduating from high school, Marilyn attended Burroughs Business School in Omaha. Marilyn and Roger made their home in Omaha and Marilyn worked at Haight, Davis, & Haight Accounting Firm until the birth of her first child, Lori. Then she was a stay at home mom and homemaker. In 1980, Marilyn and Roger moved to Plattsmouth where they owned and operated Roger's Floor and Wall. After her children were in school, she volunteered at J. P. Lord School in Omaha. Marilyn was a member of the Church of the Holy Spirit, Catholic Daughters, P.C.C.W., and a auxiliary member of the Legion of Mary all of Plattsmouth. She is survived by her loving husband of 57 years: Roger Schuette of Plattsmouth, NE, four children: Lori Low and husband David of Littleton, CO, Jeanne Pierson and husband Francis of Littleton, CO, Ray Schuette and wife Amy of Plattsmouth, NE, Mark Schuette and wife Traci of Plattsmouth, NE, nine grandchildren, seven great-grandchildren, sister: Lois McKernan of Omaha, NE, numerous nieces, nephews, cousins, and many friends. She was preceded in death by her parents: John and Mary Borovac. A Funeral Mass will be held at 10:30 A.M., Monday, August 10, 2015 at the Church of the Holy Spirit in Plattsmouth with Father David Azambawu officiating and Francis Pierson as lector. Visitation will be held Sunday, August 9, 2015 from 1:00 to 5:00 P.M., with a Catholic Daughters Rosary at 4:00 P.M., at Roby Funeral Home in Plattsmouth. A Rosary Service at 7:30 P.M., Sunday, August 9, 2015 at the Church of the Holy Spirit in Plattsmouth. The Pallbearers will be Ashlee Coffey, Jacob Schuette, Jennifer Low, Laura Sturgeon, Jessica Schultze, Rachel Low, Ashley Hamilton, Grace Schuette, and Wyatt Schuette. The family suggests Memorials to St. Jude's Children Hospital in Memphis, TN, or the Visiting Nurse Association in Omaha, NE.

MARILYN ANN SCHUETTE 1939 &#8211; 2015 Marilyn Ann (Borovac) Schuette age 76 of Plattsmouth, NE, passed away peacefully surrounded by her family on Saturday, August 1, 2015 at her residence. She was born on January 3, 1939 to John Francis and... View Obituary & Service Information

The family of Marilyn Ann Schuette created this Life Tributes page to make it easy to share your memories.

Send flowers to the Schuette family.