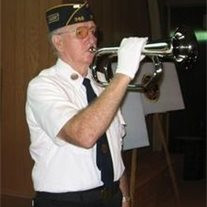 MARION MOORE 1928 – 2014 Marion "Moe" Moore age 86 of Cherokee Village, AR formerly of Plattsmouth, NE passed away peacefully on Tuesday, December 9, 2014 at the Willard Walker Hospice Home in Fayetteville, AR. Moe was born on May 21, 1928 to Hubert and Edith (Miller) Moore in Manco, KY. He was raised and schooled in Columbus, OH and attended Columbus High School. After high school, he enlisted in the US Army Air Corp and served his country during WWII. He met Betty Ann Wolfe and they were later married on August 31, 1952 in Columbus, OH. After serving in the Army Air Corp, he enlisted in the US Air Force and worked as a mechanic, serving during the Korean Conflict. Moe and Betty lived in many locations in the US and England while Moe was in the Air Force, finally settling in Plattsmouth, NE in 1959. He retired from the Air Force in 1966, while stationed at Offutt Air Force Base in Bellevue, NE. Then in 2001, Moe moved to Cherokee Village, AR where he resided until the time of his death. He was the past Post Commander and a lifetime member of Lepert Wolever V.F.W. Post #2543, a lifetime member of Hugh J. Kerns American Legion Post #56, and First United Methodist Church all of Plattsmouth. Moe was a past Scout Master of Boy Scout Troop #399, Mid America Council Scout Master of the Year, and a Lord of the Realm. Moe is survived by his two daughters: Deborah L. Bass and husband David of Bellevue, NE, Dona L. Crom and husband Ron of Cameron, MO, son: David L. Moore and wife Tanya of Prairie Grove, AR, eight grandchildren: five great grandchildren, numerous nieces, nephews, cousins, and many wonderful friends. He was preceded in death by his parents: Hubert and Edith Moore, infant son: Dennis Moore, and wife: Betty Moore. The Funeral Service will be held at 10:30 A.M., Monday, December 15, 2014 at the First United Methodist Church in Plattsmouth with Pastor Michael McGregor officiating and Connie Halouska as organist.. Visitations will be held from 1:00 to 9:00 P.M., with family greeting relatives and friends from 4:00 to 6:00 P.M., Sunday, December 14, 2014 at Roby Funeral Home. Pallbearers will be David Bass, Zachary Bass, Derrick Bass, Ron Crom, Joshua Crom, Dustin Crom, Kody Crom, and Kai Moore. Military Rites will be conducted by Offutt Air Force Base Military Rites Team of Bellevue, NE and Lepert Wolever V.F.W. Post #2543 of Plattsmouth, NE. Final Resting Place will be at Oak Hill Cemetery in Plattsmouth. The family suggests memorials to Boy Scout Troop #399 in Plattsmouth.

The family of Marion "Moe" Moore created this Life Tributes page to make it easy to share your memories.

Send flowers to the Moore family.