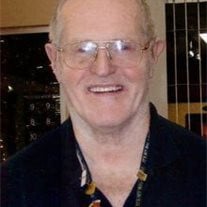 MARVIN EARL SMITH 1937 – 2014 Marvin Earl Smith age 77 of Plattsmouth, NE passed away peacefully on Saturday, September 20, 2014 at his home. Marvin was born on January 3, 1937 to Howard Tom and Clara Ann (Loxterkamp) Smith in Spencer, IA. He was raised and schooled in Sioux City and Omaha, NE. He graduated from Boys Town High School in Omaha with the class of 1954. Boys Town had a special place in Marvin's heart and he was a proud Boys Town Alumni. After graduating from high school, he attended and graduated from Iowa State University in 1958 with a bachelor's degree in Agriculture and Animal Husbandry. After graduating from Iowa State, he enlisted in the US Army and served his country for four and a half years from 1959 to 1963. While in the army, he served in the European theater and rose to the rank of captain. He traveled throughout Europe and studied French in Tours, France and German in Munich, Germany. Upon returning to the United States, he enrolled at the University of Iowa to pursue undergraduate studies in business. He had lived in Lincoln, NE, South Dakota for five years, and Omaha, NE until he met the love of his life, Betty Jo Sand. Marvin and Betty were married on February 6, 1976 in Plattsmouth, NE, where they made their home. Marvin had worked as the custodian at Walmart in Bellevue, NE for eleven years. He was a Third Degree Member of the Knights of Columbus, Father Shine Council #1966 of Plattsmouth. Marvin is survived by his brother: Chuck Smith &and wife Diane of Britton, SD, sister: JoAnn Elrod of Chesapeake, VA, Betty's family, two brothers-in-law: Gene Sand and wife Glennia of Plattsmouth, NE, Jerry Sand and wife Liz of Plattsmouth, NE, three sisters-in-law: Karen Sand of Springfield, MO, Mary Stander and husband Marty of Greensville, PA, Cheryl King of Crestview, FL, numerous nieces, nephews, cousins, and many friends. He was preceded in death by his parents: Howard and Clara Smith, wife: Betty Smith, and brother-in-law: Steve Sand. A Funeral Mass will be held at 10:30 A.M., Thursday, September 25, 2014 at Church of The Holy Spirit in Plattsmouth, NE with Father Loras K. Grell officiating, Leo Sand as acolyte, Gene Sand as lector, Terry Little as vocalist, and Laurie Hajek-Jones as organist. A Rosary followed by Vigil will be held at 6:00 P.M., Wednesday, September 24, 2014 at the Church of The Holy Spirit. Visitations will be from 1:00 to 5:00 P.M., Wednesday, September 24, 2014 at Roby Funeral Home in Plattsmouth. The Pallbearers will be Jenna Bellmyer, Nick Halmes, Steve Perrot, Aaron Sand, Jerry Sand, and Chris Smith. Military Rites will be conducted by Lepert Wolever V.F.W. Post #2543 of Plattsmouth, NE. Final Resting Place is Oak Hill Cemetery in Plattsmouth, NE. In lieu of flowers, Memorials for Masses at Church of The Holy Spirit, St. John School in Plattsmouth, and/or to Boys Town in Memory of Marvin E. Smith.

The family of Marvin Earl Smith created this Life Tributes page to make it easy to share your memories.