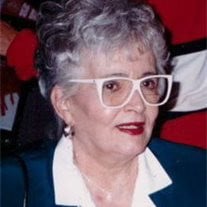 MARY PHYLLIS BELL Mary Phyllis (Soennichsen) Bell of Plattsmouth, NE passed away, peacefully on Wednesday, June 11, 2014 at Hillcrest Health Plaza in Bellevue, NE. Mary was born to Waldemar Clouse and Nora Olive (Rosencrans) Soennichsen in Plattsmouth, NE. She was raised and schooled in Plattsmouth and graduated from Plattsmouth High School. After graduating from high school, she attended the University of Nebraska at Lincoln. She met the love of her life, Donald Manby Bell and they were later married on October 5, 1951 in Plattsmouth. Mary and Donald made their home in Plattsmouth, where they raised their two sons. She was a wife, mother, and a homemaker. Mary was an avid doll collector, an Aksarben Countess, and she loved her pet poodles. She is survived by her two sons: Jeffrey "Jeff" D. Bell of Omaha, NE, Darin K. Bell and wife Tauna of Avondale, AZ, two cousins: John Soennichsen and wife Betty of CA, Richard Soennichsen of CA, and numerous friends. Mary was preceded in death by her parents: Waldemar and Nora Soennichsen and her husband: Donald Bell. A Private Family Graveside Service will be held at Oak Hill Cemetery in Plattsmouth, NE with Pastor Royal Bush officiating. Final Resting Place will be at Oak Hill Cemetery in Plattsmouth, NE. The family suggests memorials to Cass County Historical Society in Plattsmouth, NE.

The family of Mary Phyllis Bell created this Life Tributes page to make it easy to share your memories.

Send flowers to the Bell family.