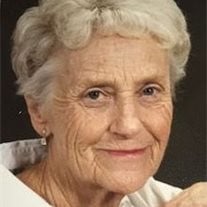 MARY ELIZABETH JOHNSON July 3, 1935 – July 9, 2017 Mary Elizabeth (Williams) Johnson age 82 of Plattsmouth, NE passed away on Sunday, July 9, 2017 at The Nebraska Masonic Home in Plattsmouth, NE. She was born on July 3, 1935 to Joseph and Ethel Jean (Jones) Williams in Verdon, NE. Mary was raised and schooled in Verdon and she graduated from Dawson-Verdon High School with the class of 1953. Then she attended and graduated from Nebraska Wesleyan University in Lincoln, NE with a Bachelors of Arts Degree in Elementary Education in 1957. She was a member of the Alpha Gamma Delta sorority. She met Lowell Ross Johnson and they were later married on June 15, 1958, in Pawnee City, NE. After graduating from college, she taught elementary school in Chicago, IL, Oxford, NE, and then moved to Plattsmouth, NE. Mary and Lowell made their home and raised their children in Plattsmouth. Mary worked as a substitute teacher and she taught Sunday School at First United Methodist Church. She was a member of the First United Methodist Church, Cub Scouts Pack 7, and the Plattsmouth Country Club. Mary is survived by her two sons: Greg Johnson and wife Joanna of Madison, MS; Jeff Johnson and wife Sherri of Plattsmouth, NE; six grandchildren: AnnaReese Johnson, Ceceila Johnson, Tyler Johnson, Megan Johnson, Paige Johnson, and Olivia Johnson; numerous cousins and many friends. She was preceded in death by her parents: Joseph and Ethel Williams, brother: Robert J. Williams, infant grandson: Tanner Johnson, son: Kurt Johnson, and her husband: Lowell Johnson. A Memorial Service will be held at 10:00 A.M., Friday, July 14, 2017 at The Nebraska Masonic Home in Plattsmouth with Pastor Lane Bailey officiating and Chris Abbott as pianist. Her Final Resting Place will be at Prairie Union Cemetery in Shubert, NE. Memorials to Family (A suitable charity will be chosen at a later date).

The family of Mary Elizabeth Johnson created this Life Tributes page to make it easy to share your memories.

Send flowers to the Johnson family.