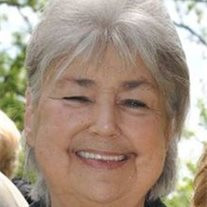 MARY EVELYN LINGLE 1950 – 2017 Mary Evelyn (Nelson) Lingle age 66 of Plattsmouth, NE passed away on Sunday, January 29, 2017 at Nebraska Medicine in Omaha, NE. She was born on February 3, 1950 to Herman W. and Harriet (Swaggert) Nelson in Harrisburg, PA. She was raised and schooled in Rutherford, PA and graduated from Dolphin High School with the class of 1968. When Mary was six or seven years old, she met the love of her life Marlin Dale Lingle. She and Marlin where married on March 17, 1968 in Middletown, PA. Mary and Marlin made their home in many different locations while Marlin served his country in the U.S. Air Force. In 1970, they settled in Plattsmouth, when Marlin was stationed at Offutt Air Force Base in Bellevue, NE. Mary had worked at Stohl School as a Teacher's Aid and at the Plattsmouth Toll Bridge. She adored her grandchildren and loved spending her time with them, especially on her favorite holidays Halloween and Christmas. She is survived by husband: Marlin Lingle of Plattsmouth, NE; two sons: Dale Lingle and wife Michelle of Glenwood, IA; Bret Lingle and wife Tracy of Bellevue, NE; her daughter: Tammy Jones and husband Steve of Papillion, NE; her eight grandchildren: Chris, Nyssa, Logan, Zoe, Tristin, Lexie, Randy, and Rachel; and many friends. Mary was preceded in death by her parents: Herman and Harriet Nelson and two grandsons: Dexter and Codie Lingle. A Celebration of Life will be held at 1:00 P.M., Saturday, February 4, 2017 at Roby Funeral Home in Plattsmouth with Father Thomas Furling officiating. Memorials to Family (A suitable charity will be chosen at a later date).

The family of Mary Evelyn Lingle created this Life Tributes page to make it easy to share your memories.

Send flowers to the Lingle family.