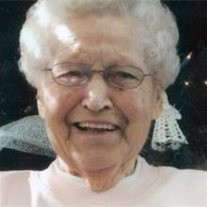 MARY SOPHIE MINER 1919 - 2015 Mary Sophie (Swanson) Miner age 95 of Louisville, NE formerly Springfield, NE passed away peacefully on Friday, June 26, 2015 at the Louisville Care Center in Louisville, NE. Mary was born on November 7, 1919 to Fritz Emil and Bena Antone (Jacobs) Swanson at the Omaha Hospital in Omaha, NE. She was from a family of fourteen children and she always had stories about growing up on her family's farm in rural Springfield and how poor they were during the depression. Mary met Orville Edgar Miner and they were later married on May 21, 1938 at the Courthouse in Papillion, NE. Mary and Orville were married for almost fifty years and made their home and raised their children in Springfield until 1984 when they moved to Louisville. She was a wife, mother, grandmother, great grandmother, and homemaker, but she had worked for Western Electric in Omaha, NE for seventeen years until she retired 1977. Mary loved her family more than anything, she gave great love to all of them. She was a strong loving and gentle women, her memory will be in our hearts until we are called to eternity. She was a member of Royal Neighbors and former member of United Methodist Church in Springfield, NE. She is survived by her son: Steve Miner and wife Dawn of Springfield, NE, two daughters: Sharon Campbell and husband Denny of Plattsmouth, NE, Susie Schobert and husband Gregg of Pearce, AZ, eight grandchildren, eleven great grandchildren, two brothers: Arthur Swanson of Atlantic, GA, Richard Swanson and wife Irene of Council Bluffs, IA, numerous nieces, nephews, cousins, and many friends. She was preceded in death by her parents: Fritz and Bena Swanson, husband: Orville Miner (September 22, 1987), six brothers, and five sisters. A Funeral Service will be held at 10:00 A.M., Thursday, July 2, 2015 at Roby Funeral Home in Plattsmouth with Pastor Michael McGregor officiating. Visitations will be held from 1:00 to 9:00 P.M., Wednesday, July 1, 2015 with the family greeting relatives and friends from 6:00 to 8:00 P.M. at Roby Funeral Home in Plattsmouth. The Pallbearers will be Jason Miner, Justin Miner, Jared Miner, Roger Campbell, Robb Campbell, Shane Campbell, Keith Schobert, Kim Hanna, and Michael Hanna. Final Resting Place will be at Glendale Cemetery in rural Louisville, NE. The family suggests memorials to Donor's Favorite Charity.

The family of Mary Sophie Miner created this Life Tributes page to make it easy to share your memories.

Send flowers to the Miner family.