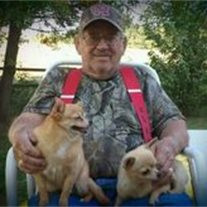 MAX SCHMELING WARREN "POP" 1931 - 2016 Max "Pop" Schmeling Warren age 85 of Rock Bluff, NE passed away on Tuesday, August 30, 2016 at his residence. He was born on July 4, 1931 to William Jennings Bryan and Mary Magdaline (Portis) Warren in Nebraska City, NE. He was named after Maximillian Adolph Otto Siegfried "Max" Schmeling, who was a German boxer who was a heavyweight champion of the world between 1930 and 1932. Pop was raised and schooled in Nebraska City, NE and attended Nebraska City High School. He met the love of his life Barbara Ann Stitt and they were later married on May 11, 1950 in Nebraska City. Pop and Barbara made their home and raised their children in Nebraska City, until 1960 when they moved to Rock Bluff. Pop was a man of all trades, he worked construction, on the railroad, and he was even a storm chaser. Pop had been a member of fishing and horse clubs. He is survived by his three daughters: Debbie Warren and Carole of Rock Bluff, NE; Linda Walton of Eldorado, MO; Tammy Warren and fiancé Mark of Eldorado, MO; two sons: Rocky Warren and wife Jan of Omaha, NE; Randy Warren of Nebraska City, NE; numerous grandchildren, great grandchildren, great great grandchildren; sister: Bernice Streeter and husband Clarence of Auburn, NE; numerous nieces, nephews, cousins, and many friends. He was preceded in death by his parents: William and Mary Warren, his wife: Barbara Warren, brother: Bill Truman Warren, and his sister: Darleen Fitzgerald and her husband Milton. Visitations will be held from 1:00 to 9:00 P.M., with family greeting relatives and friends from 6:00 to 8:00 P.M., Tuesday, September 6, 2016 at Roby Funeral Home in Plattsmouth. A Funeral Service will be held at 10:30 A.M., Wednesday, September 7, 2016 at Roby Funeral Home in Plattsmouth with Pastor Rob Conner officiating and eulogists Ron Rookstool and Dr. Joe Stangle. The Pallbearers will be Mathew Winters, Salvador Rodriguez, Travis Warren, Max C. Warren, Brett Reeves Jr., Patrick Warren, Thomas Knapp, and Christian Knapp. His Final Resting Place will be at Rock Bluff Cemetery in Plattsmouth. Memorials to the Family (A suitable charity will be chosen at a later date).

The family of Max "Pop" Schmeling Warren created this Life Tributes page to make it easy to share your memories.