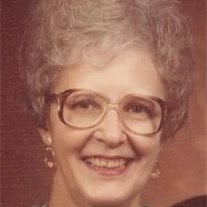 MAXINE FLORENCE YELICK 1917 - 2015 Maxine Florence (Ptacek) Yelick age 97 of Plattsmouth, NE passed away peacefully on Wednesday, June 17, 2015 at the Bellevue Medical Center in Bellevue, NE. She was born on August 11, 1917 to James and Elizabeth Pearl (Kunzmann) Ptacek in Plattsmouth. At age five, she moved with her parents to Chicago, IL, but returned to Plattsmouth every summer for a time with her grandparents. Maxine was raised and schooled in Chicago and graduated high school with the class of 1935. After graduating from high school, she moved back to Plattsmouth. When she was seventeen years old, she met the love of her life Theodore "Pete" Jack Yelick. Then three days later, Pete proposed on the Central School merry-go-round and they were later married on September 21, 1935 at the First United Methodist Church Parsonage in Plattsmouth. Shortly after their marriage, Pete and Maxine moved into her grandparents' house in Plattsmouth and she lived there for eighty years. They enjoyed many family vacations to the western states and later to visit their daughter and family in Maryland. In her later years, Maxine stayed with her daughter and family in Maryland during the winter months. Maxine had worked at Schmoller and Mueller Music Store in Omaha, NE as the manager of the record department. Then later she worked at World Insurance in Omaha until she retired in 1982. She was a speed reader and could read an entire book in one day. In her free time Maxine enjoyed quilting. She quilted, appliqued, and embroidered many beautiful quilts. She was an active member of First United Methodist Church in Plattsmouth, teaching Sunday School for twenty one years. Maxine was a Past Worthy Matron of Order of Eastern Star Home Chapter #189 and she was fifty year member and a Past Noble Grand of Rebekah Lodge #40 both of Plattsmouth. Maxine is survived by her daughter: Elizabeth (Walter) Hall of Waldorf, MD, two grandchildren: Thomas (Denise) Hall Sr. of La Plata, MD, Katherine (Dan) Friz of Mount Airy, MD, three great grandchildren: Thomas Hall Jr., Grace Friz, Laila Friz, numerous nieces, nephews, cousins, and many friends. She was preceded in death by her parents: James and Elizabeth Ptacek, husband: Theodore "Pete" Yelick, two sisters: Gertrude Bailey, Theodosia Marcelak, and brother: Buddy Ptacek. A Funeral Service will be held at 10:30 A.M., Tuesday, June 23, 2015 at First United Methodist Church in Plattsmouth with Pastor Michael McGregor officiating, Pam Osthus as vocalist, and Marsha Fleming as organist. Visitations will be held from 1:00 to 9:00 P.M., Monday, June 22, 2015 with an Eastern Star Service at 7:00 P.M. and the family greeting relatives and friends from 6:00 to 8:00 P.M. at Roby Funeral Home in Plattsmouth. The Pallbearers will be Thomas T. Hall Sr., Thomas T. Hall Jr., Clyde Thompson, Bruce Yelick, Frank Yelick, and Todd Tafoya. Final Resting Place will be at Oak Hill Cemetery in Plattsmouth, NE. In lieu of flowers, the family suggests memorials to First United Methodist Church.

The family of Maxine Florence Yelick created this Life Tributes page to make it easy to share your memories.

Send flowers to the Yelick family.