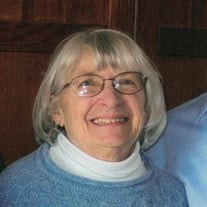 MAYBELLE LORRAINE ROHAN 1938 – 2022 Maybelle Lorraine (Warga) Rohan age 83 of Plattsmouth, NE passed away on Thursday, February 10, 2022 at Legato Living in Omaha, NE, in the company of friends and family. She is survived by her three children: Daniel “Dan” Rohan Jr. of Plattsmouth, NE; Christine "Christie" Reedy and her husband Mark of Woodbridge, VA; David “Dave” Rohan and his wife Patricia "Ticha" of Omaha, NE; five grandchildren: Katherine “Katie” Reedy, Kelly Reedy, Marin Rohan, Gabriel “Gabe” Rohan, and Simone Rohan; her sister: Marilyn Dolly of Plattsmouth, NE; and numerous nieces, nephews, cousins, and friends. Maybelle was preceded in death by her parents: James and Irene Warga, and her husband Daniel Rohan Sr. She was born on June 4, 1938 to James Edward and Irene Marguerite (Taplett) Warga on her family’s farm in rural Plattsmouth. While living on the family farm Maybelle attended Rock Bluff School. During her high school years, she boarded in town to attend Plattsmouth High School, where she graduated with the class of 1955 at age 16. After graduating, Maybelle worked at Mutual of Omaha in Omaha, NE. She met the love of her life, Daniel “Dan” Joseph Rohan Sr., at Merritt's Beach and they were married on April 23, 1960 at St. John’s Catholic Church in Plattsmouth. Maybelle and Dan made their home and raised their children in Plattsmouth. Maybelle worked for the Federal Civil Service at Offutt Air Force Base in Bellevue, NE for over 25 years, until she retired in 2004. The family is grateful for the care her son Dan provided for her in the final years of her life. Maybelle was a loving and hard-working mom. The family enjoyed numerous camping vacations to Estes Park, CO and a longer road trip to the west coast to visit relatives. In her retirement Maybelle enjoyed several memorable trips. Some of the more notable include going to Disneyworld with Christie and Katie, a bus trip to Canada with Plattsmouth friends, a couple of family cruises in the Caribbean, and a 2-month photo "safari" following the Lewis & Clark trail with Dan Jr., which took them all the way out to Oregon. She was quite social, participating in the extension club and sewing club over many years. She volunteered with the Boy Scouts while her sons were participating. Maybelle explored her artistic side through sewing, quilting and painting and she was also an avid reader. Maybelle was a member of the Church of the Holy Spirit in Plattsmouth, where she was actively involved with Marriage Encounter, Cursillo, Parrish Council of Catholic Women and the Catholic Daughters. A Visitation will be held on Tuesday, February 15 from 5:00 to 8:00 PM with a Rosary beginning at 7:00 P.M. at the Roby Funeral Home in Plattsmouth. A Funeral Mass will be held at 10:30 A.M. on Wednesday, February 16, 2022 at Church of the Holy Spirit in Plattsmouth, with Father Michael Houlihan officiating, Terry Little as vocalist, and Laurie Hajek-Jones as organist. The Pallbearers will be Matt Baroni, Luke Biesanz, Jerry Ficklin, Richard Gerbeling, Joe Rohan, and Ted Rohan. Her Final Resting Place will be at Holy Sepulchre Cemetery in Plattsmouth. The Family suggests Memorials to the Alzheimer's Association, Church of the Holy Spirit, St. John’s School, or for Masses. Services are entrusted to Roby Funeral Home, 346 Avenue A, Plattsmouth, NE 68048 (402) 296-3123 [email protected] www.robyfuneralhome.com

MAYBELLE LORRAINE ROHAN 1938 &#8211; 2022 Maybelle Lorraine (Warga) Rohan age 83 of Plattsmouth, NE passed away on Thursday, February 10, 2022 at Legato Living in Omaha, NE, in the company of friends and family. She is survived by her... View Obituary & Service Information

The family of Maybelle Lorraine Rohan created this Life Tributes page to make it easy to share your memories.

Send flowers to the Rohan family.