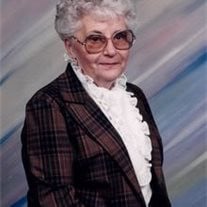 MONA DELL BEINS 1927 – 2016 Mona Dell (Patterson) Beins age 88 of Plattsmouth, NE, passed peacefully away on Sunday, September 18, 2016 at her residence. She was born on September 25, 1927 to Alexander (A.J.) and Mary Elizabeth (Lorensen) Patterson in Weeping Water, NE. Mona was raised and schooled in Weeping Water and graduated from Weeping Water High School. She met the love of her life, Tom Beins, at a dance in Syracuse, NE in December of 1950 and they immediately knew they were meant to be together. Tom was stationed at Offutt Air Force Base in Bellevue, NE, was deployed to Iceland, and they corresponded daily for a year. When Tom returned, they were married on June 15, 1952 in Weeping Water. Mona and Tom made their home in California, where Tom was stationed for two years, where their first child Randall was born in 1953. Tom was discharged from the Air Force, they returned to Weeping Water, where they owned and operated Tomona Market in Weeping Water for two years. While in Weeping Water their second child, Pam was born in 1958. Tom was employed by the US Postal Service for thirty years and Mona stayed at home as a homemaker. Mona and Tom moved to Plattsmouth, NE in 1993. Mona was a loving wife, mother, grandma, great grandma, and friend. She was a member and past president of the Fraternal Order of Eagles Aerie #365 Auxiliary in Plattsmouth, NE. She was chosen as the Nebraska State Grandmother of the Nebraska Fraternal Order of Eagles Auxiliary. Mona is survived by her husband of 64 years: Tom Beins of Plattsmouth, NE; son: Randall Beins and wife Linda Lautrup of Weeping Water, NE; daughter: Pam Peters and husband Mike of Plattsmouth, NE; three grandsons: Mark Lautrup and wife Vanessa, David Peters and fiancé Keri Thesing, Nathan Beins and wife Wendy; two great grandchildren: Chloe Lautrup, Kane Peters; one great granddaughter on the way, numerous nieces, nephews, cousins, and many friends. She was preceded in death by her parents: A.J. & Mary Patterson, five brothers: Kermit, Dale, Irving, Eldon, and Neil Patterson, and two sisters: Pauline Rector and Lova Bender. Visitations will be held from 1-9 P.M. with family greeting relatives and friends from 6-8 P.M., Wednesday, September 21, 2016 at Roby Funeral Home in Plattsmouth, NE. A Funeral Service will be held at 10:30 A.M., Thursday, September 22, 2016 at Roby Funeral Home in Plattsmouth with Chaplain Clark Medill officiating. The Pallbearers will be Dan Beins, Mark Beins, Mike Beins, Ronnie Patterson, Tony Reece, and Paul Spangler. Her final resting place will be at Oakwood Cemetery in Weeping Water, NE. The family suggests memorials to the Alzheimer's Association, Midlands Chapter. Services are entrusted to Roby Funeral Home, 346 Ave. A, Plattsmouth, NE 68048 (402) 296-3123 robyfuneralhome.com

The family of Mona Dell Beins created this Life Tributes page to make it easy to share your memories.

Send flowers to the Beins family.