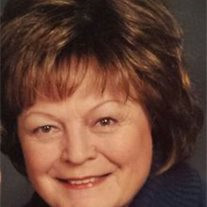 MONIKA LINA MICHAELS 1945 – 2014 Monika Lina Michaels Age 68 of Plattsmouth, NE passed away on Sunday, January 5, 2014 at her residence. She was born on November 29, 1945 to Johann Franz and Amalie Anna (Eberle) Beuscher in Mannheim-Sandhofen, West Germany. In 1958, when Monika was twelve years old she moved to Lubbock, TX with her family. She attended and graduated from Lubbock High School with the class of 1964. After high school, she attended Texas Tech and she worked at a bank and then for a utility company. She met Richard John Michaels and they were later married at Reese Air Force Base near Lubbock. Since Richard served in the US Air Force, Monika and Richard made their home in Lubbock; West Lafayette, IN; and Colorado Springs, CO. When Richard began working for Union Pacific Railroad, they lived in Omaha, NE; Liberty, MO; and in 1988 they moved to Plattsmouth, NE. Monika was a wife, homemaker, and mother. She was a member of the Church of the Holy Spirit and the P.C.C.W. for twenty six years. She was the volunteer manager of My Neighbor's Closet Thrift Shop for a quarter of a century at the Church of The Holy Spirit. While she was managing the thrift shop, she also worked at Offutt Air Base in Bellevue, NE at the BX jewelry counter for five years and volunteered at the Golden Living Center in Plattsmouth. She is survived by her husband: Richard Michaels of Plattsmouth, NE; daughter: Wendy (Bryan) Morrison of Papillion, NE; son: Eric Michaels of Sioux Falls, SD; five grandchildren: Jesse Diggins of Bellevue, NE; Emily Michaels of Sioux Falls, SD; Nicholas Michaels of Rapid City, SD; Luke Morrison of Papillion, NE; Kelsey Morrison of Papillion, NE; sister: Ilse Bessent of Lubbock, TX; three nephews, numerous cousins, and many friends. Monika is preceded in death by her parents: Johann and Amalie Beuscher, two brothers: Egon Beuscher and Heinrich Beuscher, and parents-in-law: Dick & Mary Michaels (Oskaloosa, IA). A Funeral Mass will be held at 10:30 A.M., Thursday, January 9, 2014 at Church of The Holy Spirit in Plattsmouth, NE with Father Loras K. Grell, Monsignor Paul K. Witt, Father Dhan Raj Marneni, Father Joseph Steele, Father Jeremy Hazuka, Father Matthew Zimmer, and Father Bernard Kimminau officiating, Rosemary Schmitz as lector, Lowell Daisley and Ken Aylor as acolytes, Terry Little as vocalist, and Laurie Hajek-Jones as organist. Visitation will be from 1-5 P.M., Wednesday, January 8, 2014 at Roby Funeral Home in Plattsmouth. A Rosary will be held at 7:00 P.M., Wednesday, January 8, 2014 at Church of The Holy Spirit in Plattsmouth. The Pallbearers are Jesse Diggins, Becky Toman, Lyla Schroder, Dick Schmitz, Nadine Carlson, and Daryl Morrison. Interment will be at Holy Sepulchre Cemetery in Plattsmouth. Memorials to Church of The Holy Spirit, My Neighbor's Closet Thrift Shop, and/or Plattsmouth Rescue Squad.

The family of Monika Lina Michaels created this Life Tributes page to make it easy to share your memories.

Send flowers to the Michaels family.