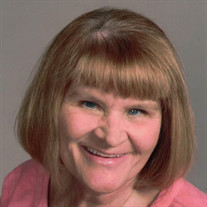 PAMELA KAY BRIDGES 1958 – 2020 Pamela “Pam” Kay Bridges, age 61 of Plattsmouth, NE passed away on Wednesday, April 8, 2020 at her residence. She was born on July 12, 1958 to Arnold Eugene and Ruth (Cotton) Zachrel in Washington D.C. She was raised and schooled in Bladensburg, MD and she graduated from Bladensburg High School. Pam attended the University of Maryland for a year and then she transferred to the Washington Hospital Center School of Nursing where she graduated as a registered nurse. Pam met Mike Wayne Bridges and they were later married on July 31, 1982 in Bladensburg. Mike was in the U.S. Air Force and he and Pam lived to Omaha, NE while Mike was stationed at Offutt Air Force Base. In 1995 they then moved to Leesburg, VA and in 2000 they moved to Plattsmouth. Pam is survived by her husband: Mike Bridges of Plattsmouth, NE; her two sons: Christopher Bridges and wife Ashley of Valdosta, GA; Michael Bridges and wife Connie of Omaha, NE; five grandchildren: Avery, Ryker, Rylee, McKenzie, and Matthew; mother: Ruth Zachrel of Selbyville, DE; her sister: Debbie Blanchard of Selbyville, DE; three brothers: Robert “Bob” Zachrel and wife Margarita of Berwyn Heights, MD; Arnold “Butch” Zachrel and wife Joanne of Poolesville, MD; Jim Zachrel of Selbyville, DE; numerous nieces, nephews, cousins, and many friends. She is preceded in death by her father: Arnold Zachrel and her brother-in-law: Richard Blanchard. A Visitation will be held from 1:00 to 9:00 P.M., with family greeting relatives and friends from 5:00 to 8:00 P.M., on Friday, June 19, 2020 at Roby Funeral Home in Plattsmouth. A Funeral Service will be held at 11:00 A.M., on Saturday, June 20, 2020 at Church of the Holy Spirit, 520 South 18th Street, in Plattsmouth with Father Michael Houlihan officiating, Terry Little as vocalist, and Laurie Hajek-Jones as organist. The Pallbearers “Pam’s Boys” will be Christopher Bridges, Michael Bridges, Lee Scates, Austin Zachrel, Alex Zachrel, Jacob Oliver, Jacob Gullekson, Benjamin Smith, Aaron Smith, and Brandon Gaines. The Honorary Pallbearers will be Matthew Bridges and Ryker Bridges. Her Final Resting Place will be at Oak Hill Cemetery in Plattsmouth. There will be a Luncheon at Pam and Mike's Home in Plattsmouth at 1:00 P.M. on Saturday, June 20, 2020. Memorials for Cancer Research or Please send Flowers. Services Entrusted to Roby Funeral Home, 346 Ave. A, Plattsmouth, NE 68048 (402) 296-3123 robyfuneralhome.com

The family of Pamela Kay Bridges created this Life Tributes page to make it easy to share your memories.

Send flowers to the Bridges family.