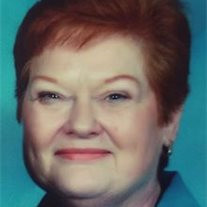 PATRICIA "PAT" MARIE CARSTENS August 17, 1947 – December 8, 2017 Patricia "Pat" Marie (Lowrey) Carstens, age 70, of Murray, NE died Friday afternoon, December 8, 2017 at her home. She was born on Sunday, August 17, 1947 to Russell "Bud" Lowrey and Norma Lee Allen in Fairbury, NE. Pat was raised and schooled in Beatrice, NE and she graduated from St. Joseph Catholic High School with the class of 1965. Pat met Keith M. Carstens and they were later married on February 20, 1966 in Beatrice, NE. Pat and Keith made their home, raised their children, and owned and operated the Murray Lockers for many years in Murray, NE. She was a wife, mother, grandmother, stay at home mom, and a homemaker. Pat was a member of the Church of the Holy Spirit of Plattsmouth, NE. She is survived by her husband of fifty-one years: Keith Carstens of Murray, NE; her two daughters: Teri Carstens of Casper, WY; Kim-Marie Carstens of Casper, WY; her son: Christopher Carstens and his wife Jennifer of Austin, TX; thirteen grandchildren; four great grandchildren; her brother: Thomas Lowrey and wife Jody of Reno, NV; several cousins, nieces, nephews, and many friends. She was preceded in death by her father: Russell "Bud" Lowrey, mother: Norma L. Pfeiffer, and her granddaughter: Elizabeth Anne Stilwagon. Visitations will be held from 1:00 to 5:00 P.M., Tuesday, December 12, 2017 at Roby Funeral Home in Plattsmouth. A Rosary will be held at 7:00 P.M., Tuesday, December 12, 2017 at Church of the Holy Spirit in Plattsmouth. The Funeral Mass will be held at 10:00 A.M., Wednesday, December 13, 2017 at Church of the Holy Spirit in Plattsmouth with Father Michael Houlihan officiating and Terry Little vocalist. Final Resting Place will be at St. Joseph's Catholic Cemetery in Beatrice, NE. In lieu of flowers, Memorials to the Family (A suitable charity will be chosen at a later date). Services are entrusted to Roby Funeral Home, 346 Ave. A, Plattsmouth, NE 68048 (402) 296-3123, robyfuneralhome.com.

The family of Patricia "Pat" Marie Carstens created this Life Tributes page to make it easy to share your memories.