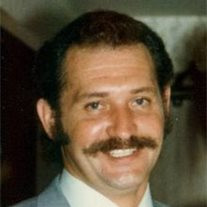 RANDALL THOMAS RUFFCORN 1949 – 2015 Randall "Randy" Thomas Ruffcorn age 65 of Plattsmouth, NE passed away on Tuesday, February 24, 2015 at the Douglas County Health Center in Omaha, NE. He was born on March 14, 1949 to Raymond and Betty Jean (Cartmill) Ruffcorn in Little Sioux, IA. He was raised and schooled in Omaha, NE and graduated from South High School with the class of 1968. After high school, he moved to California and worked as an auto mechanic for Firestone. Then he worked as a Fleet Manager for a waste management company. He met Olivia Edna Reedy and they were married on September 18, 1982 in Las Vegas, NV. Randy and Olivia made their home in California, where their daughter Amber was born in 1994. Then, in May 1995 they moved to Omaha, NE, where Randy worked at AutoZone Auto Parts until 2003 when he medically retired, due to his illness. Randy is survived by his wife: Olivia Ruffcorn of Plattsmouth, NE, daughter: Amber Ruffcorn of Plattsmouth, NE, two brothers: Richard Ruffcorn and wife Diane of Omaha, NE, Russell Ruffcorn of Omaha, NE, numerous nieces, nephews, cousins, and many friends. He was preceded in death by his parents: Raymond and Betty Ruffcorn and a sister in law: Barbara Ruffcorn. A Celebration of Life will be held at 2:00 P.M., Saturday, February 28, 2015 at Roby Funeral Home in Plattsmouth. Memorials to the Family (A suitable charity will be chosen at a later date).

The family of Randall "Randy" Thomas Ruffcorn created this Life Tributes page to make it easy to share your memories.