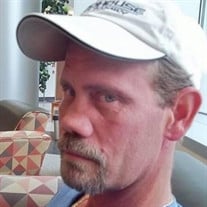 RICHARD LEE DRAPER 1969 – 2021 Richard “Rick” Lee Draper, age 51 of Shelby, IA passed away on Saturday, February 20, 2021 at his residence. He was born on May 3, 1969 to James “J.C.” Clyde Draper and Victoria Lea (Herbst) Draper in Nebraska City, NE. Rick was raised and schooled in Plattsmouth and he graduated from Plattsmouth High School with the class of 1988. After graduating from high school, he enlisted in the U.S. Navy and he proudly served his county for four years. While serving his country he was stationed in Sicily, where he married and had three children. Rick made his home in Sicily for twenty years, then he returned to Nebraska where he worked in Omaha and later he made his home in Shelby, IA. Rick is survived by his children: Monica, Kevin, and Giuseppe “Joey” Draper of Catania, Sicily; Charlee Draper of Texas; mother: Kathy Draper of Plattsmouth, NE; six brothers: Scott Draper and wife Kelli of Omaha, NE; Rod Draper and wife Geri of Plattsmouth, NE; Scott R. Draper and wife Danielle of Dickinson, ND; Craig Draper and wife Kristina of Kearney, NE; Sean Draper and Shea of San Antonio, TX; Nick Draper of Omaha, NE; two sisters: Sonya Jewell of Omaha, NE; Stacey Webb and husband Dan of Fort Dodge, IA; numerous nieces, nephews, cousins, and many friends. He was preceded in death by his father: J.C. Draper, mother: Victoria Draper, his brother: Christopher Draper, and two nephews: Austin Calkins and Koby Draper. Visitations will be held from 6:00 to 8:00 P.M., Friday, February 26, 2021 at Roby Funeral Home in Plattsmouth, NE. A Graveside Memorial Service will be held at 11:00 A.M., Saturday, February 27, 2021 at Pleasant Ridge Cemetery in Plattsmouth. Memorials to the Family (A suitable charity will be chosen at a later date). Services Entrusted to Roby Funeral Home, 346 Ave. A, Plattsmouth, NE 68048 (402) 296-3123 robyfuneralhome.com

The family of Richard Lee Draper created this Life Tributes page to make it easy to share your memories.

Send flowers to the Draper family.