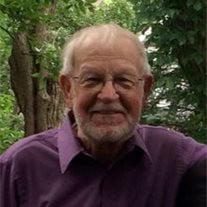 RICHARD JAMES LANTEFIELD 1931 – 2017 Richard "Rick" James Lantefield age 86 of Plattsmouth, NE passed away on Tuesday, December 12, 2017 at Nebraska Medicine – Bellevue. He was born on July 20, 1931 to Frank Albert and Lillian Florence (Anderson) Lantefield in Oakland, NE. Rick was raised and schooled in Oakland and he graduated from Oakland High School with the class of 1949. After graduating from high school, he enlisted in the U.S. Navy and served his country for four years during the Korean Conflict from 1951 until 1954. He met Dorthie Lorraine Sorenson and they were later married on June 16, 1956 in Denver, CO. Richard and Dorthie made their home and raised their children in Omaha. He worked as a boat manufacture representative and salesman for many years. In 1986, Rick and Dorthie moved to Plattsmouth, NE and have been here since. Rick was member of the Church of the Holy Spirit in Plattsmouth. He is survived by his daughter: Debra Brink and husband Edward of Plattsmouth, NE; two sons: Richard Lantefield and wife Kelly of Leawood, KS; Scott Lantefield and wife Laura of Boise, ID; nine grandchildren: Andrew Brink, Emily Brink and spouse Kelsey Crites, Laura Brink, Kali Willis and husband Jeff, Mackenzie Lantefield, Cooper Lantefield, Rachel Griffith and husband Jordan, Samantha Lantefield, Zachary Lantefield; two great grandchildren: Brantley Griffith, Paityn Griffith; numerous nieces, nephews, cousins, and many friends. He was preceded in death by his parents: Frank and Lillian Lantefield, infant sister: Merrily Susannah Lantefield, brother: Paul D. Lantefield, and his wife: Dorthie Lantefield. A Memorial Mass will be held at 11:00 A.M., Friday, March 9, 2018 at the Church of the Holy Spirit in Plattsmouth with Father Michael Houlihan officiating, Lowell Daisley and Jeff Scanlan as acolytes, Terry Little as vocalist, and Laurie Hajek-Jones as organist. His final resting place will be at Omaha National Cemetery in Omaha, NE. Military Rites will be conducted by the U.S. Navy Funeral Honor Guard. The Family suggest Memorials to the Church of the Holy Spirit. Services are entrusted to Roby Funeral Home, 346 Ave. A, Plattsmouth, NE 68048. (402) 296-3123 robyfuneralhome.com.

The family of Richard "Rick" James Lantefield created this Life Tributes page to make it easy to share your memories.