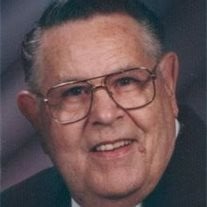 RICHARD L. O'DONNELL 1924 - 2016 Richard L. O'Donnell age 91 of Warsaw, MO formerly of Plattsmouth, NE passed away peacefully on Friday, January 30, 2016 in Warsaw. He was born the fourth of seven children on November 1, 1924 to William Patrick and Hilda (Petersen) O'Donnell at his family's home in Plattsmouth, NE. Richard attended Catholic School through the eighth grade, then finished his education at Plattsmouth High School graduating with the class of 1943. After receiving their draft notices, Richard and five other classmates had to go to the Cass County Court House to apply for a deferment, so they could get their diplomas before they shipped out. Richard went into the U.S. Army as a private but was soon promoted to mess sergeant which carried the rank of Master Sergeant. He served overseas for more than two years in Okinawa and Guadalcanal. He kept in contact with a girl, Virginia Alice Ashcraft, he met before deployment and they were later married on April 30, 1946 in Nebraska City, NE. Richard and Virginia made their home in Plattsmouth, where they raised their family of three children Dixie, Dick, and Mike. Richard was in the grocery business from the time he was in high school until his retirement in 1986, when he moved to Warsaw, MO to be near his youngest son. There he remained until his death on January 20, 2016. Richard is survived by his daughter: Dixie Hild and husband Ron of Omaha, NE; two sons: Richard "Dick" J. O'Donnell of Plattsmouth, NE; John "Mike" Michael O'Donnell and wife Cora of Edwards, MO; daughter-in-law: Jan O'Donnell of West Union, IA; seven grandchildren: Kim Abboud of Omaha, NE; Troy Hild and wife Renae of Omaha, NE; Greg Hild and wife Lee Ann of Kansas City, MO; Michael O'Donnell and wife Melissa of O'Fallon, MO; Bridget Glover and husband Jason of Columbia, IL; Beth O'Donnell and husband Pat of Plattsmouth, NE; Tracy O'Donnell and Andrea of Pistoia, Italy; nineteen great grandchildren; sister-in-law: Marie O'Donnell of Plattsmouth, NE; numerous nieces, nephews, cousins, and many friends. He was preceded in death by his parents: William and Hilda O'Donnell, his devoted wife of sixty six years: Virginia O'Donnell (December 24, 2012), two brothers: Bill O'Donnell and Jack O'Donnell, and four sisters: Shirley Hull, Genevieve Conn, Betty Campbell, and Mary MacFarlane. A Graveside Memorial Service will be held at 11:00 A.M., Saturday, March 5, 2016 at Oak Hill Cemetery in Plattsmouth with officiating and Military Rites by Lepert Wolever V.F.W. Post #2543 of Plattsmouth. Final Resting Place will be at Oak Hill Cemetery in Plattsmouth, NE. Memorials to the Family (A suitable charity will be chosen at a later date).

The family of Richard L. O'Donnell created this Life Tributes page to make it easy to share your memories.

Send flowers to the O'Donnell family.