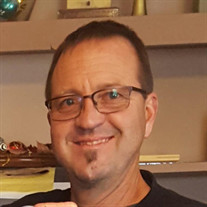 RICKY LEE ISHAM 1959 – 2021 Ricky “Rick” Lee Isham, age 62 of Plattsmouth, NE passed away on Wednesday, June 23, 2021 at the Nebraska Medical Center in Omaha. Rick was born on January 16, 1959 to Donald Ray and Alice Marie (Helgoth) Isham in Davenport, IA. He graduated from Mitchell High School with class of 1977. He met Kelli Anne Beckman and they were married on December 31, 2013 in Plattsmouth. Rick and Kelli made their home in Plattsmouth and Rick worked for Black Hill Energy, as a C and M Operations Tech Specialist for 42 years. He was an avid cyclist and archer who built his own bows. Rick participated in high school sports, he grew up racing dirt bikes with his brothers, bringing home many trophies. Rick enjoyed racing RC cars on his track that he built by his garden and the one he built in the woods behind his house. Rick loved gardening and he took great pride in raising his own produce and canning his bounty. Rick loved feeding the wildlife in his back yard. Everyone Rick met became his friend. Rick had an amazing smile and contagious chuckle. Rick showed genuine love and interest for all he knew. Rick is survived by his wife: Kelli Isham of Plattsmouth, NE; three daughters: Bridget Isham of Omaha, NE; Shannon Hadraba and husband Michael of Bellevue, NE; Piper Isham of Plattsmouth, NE: two sons: Joel Beckman and wife Rachel of Spring Hill, TN; Drew Witherspoon and wife Allie of Bellevue, NE; five grandchildren: Seth, Karlee, Riley, Jane, and Benjamin; two brothers: Rod Isham and wife Becky of Baker City, OR; Randy Isham and wife Wendy of David City, NE; father and mother in law: Tom and Karen Beckman of Plattsmouth, NE; many nieces, nephews, cousins, and numerous friends. He was preceded in death by his parents: Donald and Alice Isham and his sister: Cindy Isham. Visitations will be held from 1:00 to 8:00 P.M., with family greeting relatives and friends from 6:00 to 8:00 P.M., on Friday, June 25, 2021 at Roby Funeral Home in Plattsmouth. A Memorial Service will be held at 10:00 A.M., Saturday, June 26, 2021 at Roby Funeral Home, (casual attire, please) with Pastor Michael McGregor officiating, followed by a Celebration of Rick’s Life at Rock Hill Windmill Event Center, 5910 Ranch Rd., Plattsmouth, NE, starting at 12:00 P.M. Memorials to the Family (A suitable charity will be chosen at a later date). Services are entrusted to Roby Funeral Home, 346 Ave. A, Plattsmouth, NE 68048 (402) 296-3123 robyfuneralhome.com

The family of Ricky Lee Isham created this Life Tributes page to make it easy to share your memories.

Send flowers to the Isham family.