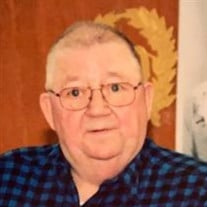 ROBERT ALLEN BEINS 1933 – 2021 Robert “Bob” Allen Beins, age 87 of Springfield, NE passed away on Wednesday, January 27, 2021 at Bergan Mercy Hospital in Omaha, NE. Bob was born on September 12, 1933 to Lee Roy and Anna Pearl (Wilson) Beins in Murray, NE. He graduated from Plattsmouth High School in 1952. He married the love of his life, Mary Ann True on March 13, 1954 at First Presbyterian Church in Plattsmouth, NE. Bob was working for Ash Grove in Louisville, NE when he was drafted into the Army. His service started on Valentine’s Day, 1955. He served in the U.S. Army for two years. After his service, he returned to work for Ash Grove where he later retired after 40 years of employment. Some of Roberts past times were spent as a volunteer fireman, a Golden Eagle in Plattsmouth, a bartender at Hackey’s bar in Springfield, NE, a Cub Scout leader and waiting tables at the Legion in Louisville. Bob loved to listen to Polka music and was a great dancer. He loved watching old western movies and John Wayne was one of his favorite actors. Robert was extremely frugal and always found ways to make things work by spending the least amount of money, even if that meant using a pair of vice grips to turn on the basement sink for 15 years. Bob was very stubborn and hard headed….literally hard headed. In 1970, Bob was working at Ash Grove when a crane bucket fell and hit him on the head. Thankfully, he was wearing a hard hat and was able to survive that horrible incident. Bob enjoyed doing math and was always playing with numbers. Bob’s mind was constantly going and he constantly had new ideas of things to build or fix. Bob had a green thumb and took pride in his large garden in Cedar Creek and in Springfield. Most of all, Bob enjoyed spending time with his family and he dearly loved his wife, children and all of his grandchildren. He is survived by his wife of 66 years: Mary Ann Beins of Springfield, NE; three sons: Lynn Beins and wife Diana of Ashland, NE; Terry Beins of Sefner, FL; Mark Beins of Springfield, NE; seven grandchildren: Bryon, Terry Jr., Susan, Erin, Mason, Kelsea, and Nicolette; eighteen great grandchildren: Tyler, Cody, Jake, Gage, Hailey, Skylar, Mickey Lee III, Madisen, Sara, Kalob, Presley, Sadie, Larry, Jordyn, Isabelle, Athena, Robert, and Cooper; one great great grandchild: Cayden; two brothers: Thomas Beins of Plattsmouth, NE; Donald Beins and wife Benne Rae of Bellevue, NE; his sister: Delores Schuetz and husband Jon of Omaha, NE; sister-in-law: Gloria Fuxa and husband Eldon of Cedar Creek, NE; numerous nieces, nephews, cousins, and many friends. Bob is preceded in death by his parents: Lee Roy and Anna Pearl Beins, his beloved daughter: Barbara Ann Beins, his brother: Fred Beins and his wife Mary Jane, sister-in-law: Mona Beins. Visitations will be held from 4:00 to 6:00 P.M., on Sunday, January 31, 2021 at Roby Funeral Home in Plattsmouth. *Covid 19 guidelines will be followed at the mortuary, please wear a mask and use social distancing.* A Private Family Funeral Service will be held on Monday, February 1, 2021 at Roby Funeral Home in Plattsmouth. The Pallbearers will be Mickey Hobbs, Matt Taylor, Tyler Melia, Cody Hobbs, Gage Beins, Skylar Thomson, Bryon Beins, and Mickey Hobbs III. His Final Resting Place will be at Glendale Cemetery in Louisville. Memorials to the Springfield Fire Department. Services are entrusted to Roby Funeral Home, 346 Ave. A, Plattsmouth, NE 68048. (402) 296-3123 robyfuneralhome.com

The family of Robert Allen Beins created this Life Tributes page to make it easy to share your memories.

Send flowers to the Beins family.