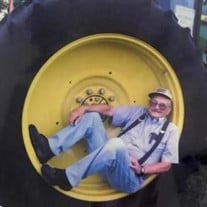 ROBERT ROY COLE 1925 – 2022 Robert “Bob” Roy Cole age 96 of Plattsmouth, NE passed away on Sunday, April 24, 2022 at The Nebraska Masonic Home in Plattsmouth. Bob was born on July 21, 1925 to Roy O. and Virgia Pearl (Keefer) Cole at his family’s farmhouse south of Plattsmouth. He attended country school and Bob graduated from Plattsmouth High School. There he and his best friend George Jacobs, who later became his brother-in-law, won a statewide debate tournament. He was a 4-H member for a number of years having projects in beef, chickens, forestry, and he took first place in a statewide 4-H speaking contest. Later, while attending Nebraska Wesleyan University in Lincoln, NE he met his first wife Lila Stock, a meeting that resulted in their marriage on July 30, 1948. After graduating in 1950, Bob and Lila returned to the Cole family farm, which they operated until retirement. Having become a Christian at about 12 years of age, he was active in the churches to which they belonged. Bob served as a deacon, treasurer, and he taught Sunday school for many years. One of the most satisfying and challenging classes was a group of young married couples, which he and Lila led. He served on the board of the Nebraska Farm Bureau, Cass County Farm Bureau, Cass Non-Stock Co-op, Iowa Mutual Insurance Company, Jean School District #3, as well as over 30 years as the secretary and sexton of Pleasant Ridge Cemetery Association. He was a member of the Mensa Society, and the River City Theater Organ Society. Freemasonry was also an important part of his life. He was a 75 year member of the Plattsmouth Masonic Lodge #6 A.F. and A.M. After his family was raised, Bob was active in the York Rite Masonry, being a member of Nebraska Chapter #3, Royal Arch Masons, Adorniram Counsel #5, Cryptic Masons, Mount Zion Commandery #5, Knights Templar, and Sneh Bo’ Aire Council #17, and Allied Masonic Degrees. He and Lila also belonged to the Order of the Eastern Star Home Chapter #189. Bob was an avid reader, especially political articles and books, and in his younger years he worked in various election campaigns. Later he became interested in genealogy and adding to the efforts of his father and other relatives had over 5800 names in his genealogy program. He enjoyed the hobby of woodworking, making gifts and knickknacks most of which were given away. Another interest was in theater pipe organs which he enjoyed through concerts and recordings. His most enjoyable hobby, however, was flying. Using money received from the sale of a huge old walnut tree, he got his private pilot’s license and then owned several different planes either in partnership or as sole owner. His favorite trips were fishing trips to Canada and frequent flights to Colorado to spend time in the family’s cabin at Red Feather Lakes. Numerous vacations were spent at that cabin, and their children and friends have many happy memories of the times spent there. Much of Bob’s pride came from his three children who made family gatherings so enjoyable. Each of them has followed their parent’s spiritual training and are active in their respective churches. He also enjoyed the grandchildren and great grandchildren. Among the saddest moments of his life were when his grandson Kevin Cole Olson and grandson Timothy Ryan Olson each passed away. He looked forward to meeting them again in heaven. Bob is survived by his wife: Sue Cole of Bellevue, NE; two daughters: Carol Duckworth and her husband Ron of Plattsmouth, NE; Jan Olson and her husband Dan of Lee’s Summit, MO; one son: Steven Cole and his wife Cathy of Plattsmouth, NE; four grandchildren: Monica Ryan and her husband Jim of Gretna, NE; Cory Duckworth and his wife Traci of Blair, NE; Christy Knox and her husband Ryan of St Louis, MO; Megan Cole of Council Bluffs, IA; eleven great grandchildren; two great great grandchildren; Sue’s children: Theresa Weitkamp and her husband Larry of Washington, IN; John Hovis and his wife Sandra of Loogootee, IN; Amy Sanders of Bellevue, NE; Sue’s two granddaughters: Abby Lemken of Omaha, NE; Emma Lemken of Bellevue, NE; other grandchildren and great grandchildren; numerous nieces, nephews, cousins, and a host of friends. He was preceded in death by his parents: Roy and Pearl Cole, his first wife: Lila Cole, two sisters: Eloise Jacobs and Mary Margaret Chapman, and two grandsons: Kevin Olson and Tim Olson. Visitations will be from 1:00 to 9:00 P.M., with family greeting relatives and friends from 6:00 to 8:00 P.M., on Wednesday, April 27, 2022 at Roby Funeral Home in Plattsmouth. A Masonic Lodge Service will be held at 7:00 P.M., on Wednesday, April 27, 2022 at Roby Funeral Home. A Memorial Service will be held at 11:00 A.M., Thursday, April 28, 2022 at the LifeSpring Church in Bellevue, NE with Pastor Steve Holdaway officiating. His Final Resting Place will be at Pleasant Ridge Cemetery in Plattsmouth. In lieu of flowers, Bob’s family suggests Memorials to the Pleasant Ridge Cemetery Association. Services are entrusted to Roby Funeral Home, 346 Avenue A, Plattsmouth, NE 68048 (402) 296-3123 [email protected] www.robyfuneralhome.com

The family of Robert Roy Cole created this Life Tributes page to make it easy to share your memories.

Send flowers to the Cole family.