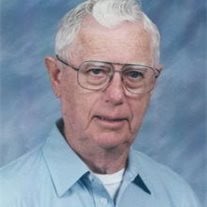 ROBERT GLENN JANNEY 1926 - 2014 Robert "Bob" Glenn Janney age 87 of Tecumseh, Nebraska passed away on Monday, March 10, 2014 at his residence. Robert was born on July 30, 1926 to Everett Roy and Mary (Wetenkamp) Janney in Omaha, NE. He was raised and schooled in the Norfolk, NE area and graduated from Norfolk High School with the class of 1945. After high school, Bob enlisted in the U.S. Army and served his country during WWII, from November 16, 1945 to November 21, 1946. Then he attended and graduated from the University of Nebraska at Omaha with a Bachelor's degree in business in 1951. After graduating from college, he worked for Goodyear for eight years. Then in 1963, he began working for the Nebraska Public Power District as an inspector until he retired in 1985. He met the love of his life, Bertha "Bert" Margaret Benge and they were later married on April 28, 1972 in Lincoln, NE. Bob and Bert made their home and lived in Tecumseh. He was a member of Hugh J. Kerns American Legion Post #56 of Plattsmouth, NE. Bob is survived by his wife: Bert Janney of Tecumseh, NE, son: Kerry Douglas Janney and wife Peggy of Franklin, IN, daughter: Karen Taylor of Helena, MT, step-son: Harry Daniels and wife Ida of Crab Orchard, NE, eight grandchildren, seven great grandchildren, and many friends. Bob was preceded in death by his parents: Everett and Mary Janney and son: Kim Michael Janney. A Funeral Service will be held at 11:00 A.M., Thursday, March 13, 2014 at Roby Funeral Home in Plattsmouth, NE with Pastor Carl Anderson officiating. Interment will be at Oak Hill Cemetery in Plattsmouth, NE. Pallbearers will be Greg Good, Michael Good, David Good, Steve Devitt, Kelly Daniels, and Kerry Janney. Military Rites will be conducted by Lepert Wolever V.F.W. Post #2543 of Plattsmouth, NE. The family suggests Memorials to Donor's Favorite Charity.

The family of Robert Glenn Janney created this Life Tributes page to make it easy to share your memories.

Send flowers to the Janney family.