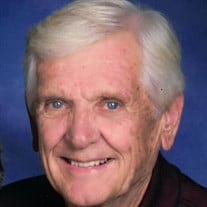 ROGER WILLIAM SCHUETTE 1936 – 2021 Roger William Schuette age 84 of Plattsmouth, NE, passed away peacefully surrounded by his family on Wednesday, September 15, 2021 at his son’s residence. He was born on December 28, 1936 to William and Almira Amanda (Bickels) Schuette in Omaha, NE. Roger was raised and schooled in Omaha and he attended Technical High School. He enlisted in the U.S. Army and he proudly served his country for two years. After serving his country, he returned to Omaha and he worked for his father’s floor covering company. Roger met the love of life, Marilyn Ann Borovac, on a blind date on Marilyn’s high school graduation day. Roger and Marilyn were engaged on December 24, 1957 and they later married on May 10, 1958 at St. Peter and Paul Catholic Church in Omaha. They made their home in Omaha until 1980 when Roger and Marilyn moved to Plattsmouth where they owned and operated Roger’s Floor and Wall. Roger later got into videography, which he was well known for in the Plattsmouth area. He also drove the school bus for St. John the Baptist School and he was a blood donor because his rare blood type. Roger was a member of the Church of the Holy Spirit, Plattsmouth Lion’s Club, a board member of the Cass County Historical Society, and he was the 2016 Cass County King Corn Carnival King. He is survived by his four children: Lori Low and husband David of Littleton, CO; Jeanne Pierson and husband Francis of Littleton, CO; Ray Schuette and Karen Krips of Plattsmouth, NE; Mark Schuette and wife Traci of Plattsmouth, NE; nine grandchildren; fourteen great-grandchildren; two brothers: Clem Schuette and wife Eva Lou of Greely, CO; Raymond Schuette an wife Penny of Cleveland, OH; sister: Lorraine Kohrs and husband Keith of Pueblo, CO; numerous nieces, nephews, cousins, and many friends. Roger was preceded in death by his parents: William and Almira Schuette and his wife: Marilyn Schuette. Visitations will be held from 1:00 to 5:00 P.M., on Tuesday, September 21, 2021 at Roby Funeral Home in Plattsmouth. A Rosary will be held at 7:00 P.M., Tuesday, September 21, 2021 at the Church of the Holy Spirit in Plattsmouth. A Funeral Mass will be held at 10:00 A.M., Wednesday, September 22, 2021 at the Church of the Holy Spirit in Plattsmouth with Father Michael Houlihan officiating, Pat Carroll as acolyte, Terry Little as vocalist, and Laurie Hajek-Jones as organist. The Pallbearers will be Ashlee Coffey, Jacob Schuette, Jennifer Rozeboom, Laura Sturgeon, Jessica Schultze, Rachel Low, Ashley White, Grace Macias, and Wyatt Schuette. Military Rites will be conducted by Nebraska Army National Guard, Military Funeral Honor Guard. His Final Resting Place will be at Holy Sepulchre Cemetery in Plattsmouth. The family suggests Memorials to St. Jude’s Children Hospital in Memphis, TN, St. Croix Hospice, or Church of the Holy Spirit. Services are entrusted to Roby Funeral Home, 346 Avenue A, Plattsmouth, NE 68048 (402) 296-3123 [email protected] www.robyfuneralhome.com

The family of Roger William Schuette created this Life Tributes page to make it easy to share your memories.

Send flowers to the Schuette family.