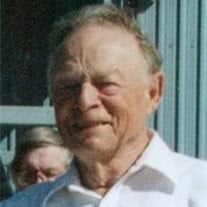 RUSSELL HARRY NIELSEN 1925 - 2016 Russell "Rus" Harry Nielsen age 91 of Plattsmouth, NE passed away on Thursday, May 26, 2016 at The Nebraska Masonic Home in Plattsmouth. Rus was born on January 6, 1925 to George Harry and Lillian C. (Adams) Nielsen in Dannebrog, NE. He was raised and schooled in Plattsmouth. Growing up in the country, Rus attended the Mercerville Country School and traveled into town for high school. He was a good student and participated in sports and numerous other school activities. Russell graduated from Plattsmouth High School with the Class of 1942. After graduating from Plattsmouth High School he joined the U.S. Air Force during World War II. His duties kept him stateside, so when his stint was completed, Rus returned to Plattsmouth but was later recalled into the Korean Conflict. He worked at the U.S. Post Office in Plattsmouth for 34 years, his last 15 years as Assistant Postmaster. Rus also worked as a farmer with his father and was landscape planner with Marshall Nurseries. He has designed and landscaped many areas in Plattsmouth and the surrounding countryside including the Plattsmouth Country Club. After retiring from the post office, he was the manager of the Falls City Savings and Loan Association in Plattsmouth. Russell's interests have always been intricately related to the community as well as to his family. He was an active member of PTA where he served as president and was awarded a lifetime membership. His desire to continue being active in school affairs was expressed by running and being elected to the Plattsmouth School Board. He served from 1961 to 1976 and was entrusted with the duty of president for that group from 1966 to 1976. Rus stayed active in school events, including filming football games for several years and helping start and build the high school track. Timing and picking racers in the Plattsmouth Invitational have been part of his ongoing support. He dressed up in his old baseball uniform and read baseball stories to the elementary children during Read Across America Week. He also participated in the POPS program and was a Booster Club member for many years. Having four sons, Rus spent many years as a coach for little league and Legion Baseball program. He was American Legion Commander and American Legion Baseball Manager. He survived the critical remarks of baseball fans as an umpire for several years. Scouting was another activity in which Rus became involved. While organizing and becoming the Explorer Advisor of Explorer Post 399, Rus thoroughly enjoyed spending time camping, canoeing and participating in events with the Scouts. Rus was a member of the First United Presbyterian Church of Plattsmouth where he has served as deacon, elder, choir member, and officer. He was affiliated with the Masonic Lodge and reached the top office of Worshipful Master. His membership in Eastern Star, Eagles, Forty-and-Eight, Rotary (as president) and other civic groups were important to him. Rus served on the governing board of the library, cemetery, and state jail standards. He was elected County Commissioner and was a past King of the Kass Kounty King Korn Karnival. He was the Cass County Civil Defense Director for several years. He had received an American Legion Distinguished Service Award, a Rotary Service Above Self Award, and the Junior Chamber of Commerce Distinguished Service Award. Rus carved a niche in this community, gave unselfishly of his time, and put forth his best efforts in bettering his chosen home community and its youth throughout his adult life. On Dedication Opening Day 2005 at the Plattsmouth Baseball Field, Rus was honored for more than 50 years of selfless service to the youth of Plattsmouth. He was inducted into the Plattsmouth High School Hall of Fame in 2007. Rus is survived by his wife: Betty Jo Nielsen of Plattsmouth, NE; four sons: David Nielsen and wife Mary of Murray, NE; Steve Nielsen and wife Susie of Bellevue, NE; Stuart "Stu" Nielsen and wife Susie of Plattsmouth, NE; Ran Nielsen and wife Tish of Wichita, KS; thirteen grandchildren: Niel Nielsen and wife Julie, Marcus Nielsen and wife Marcail, Amy Mason and husband Aaron, Dusty Nielsen and wife Jennie, Lindsay Stangl and husband Travis, Matt Carlson and wife Shelbie, Scott Nielsen and wife Naomi, Sherry Arch and husband Rick, Spencer Nielsen and wife Missy Iverson, Jeremy Nielsen and wife Jill, Jerrod Nielsen and wife Shannon, Zach Nielsen, and Ariann Nielsen, twenty seven great grandchildren, sister: Ella Mary Kerns and husband Charles of Plattsmouth, NE; numerous nieces, nephews, cousins, and many friends. He was preceded in death by his parents: Harry and Lillian Nielsen, sister: Maxine Bowman, and his daughter: Nancy Nielsen. Visitations will be held from 1:00 to 9:00 P.M., with family greeting relatives and friends from 5:00 to 7:00 P.M., Wednesday, June 1, 2016 at Roby Funeral Home in Plattsmouth. A Masonic Lodge Service will be held at 7:00 P.M., Wednesday, June 1, 2016 at Roby Funeral Home. A Celebration of Life will be held at 11:00 A.M., Thursday, June 2, 2016 at Upper Plattsmouth Memorial Field in Plattsmouth with Pastor Carl Anderson officiating and eulogist Lt. Gen. (NE., ret.) Roger P. Lempke, Director of Military and Veterans Affairs, Office of Senator Deb Fisher as eulogist. Casual or sports attire is welcomed. Private Family Graveside Service will be held at Pleasant Ridge Cemetery in Plattsmouth. The Pallbearers will be Dusty Nielsen, Scott Nielsen, Jeremy Nielsen, Jerrod Nielsen, Zachary R. Nielsen, Trevor Nielsen, Andrew Nielsen, Zach Nielsen, and Matt Carlson. The Honorary Pallbearers will be Charles Bowman, Mike Bowman, Bill Gebhart, Charles Kerns, Terry Kerns, and Glenn Van Westen. Honor Guard will provided by Lepert Wolever V.F.W. Post #2543 of Plattsmouth. In lieu of flowers, the family suggests Memorials to PACK (Plattsmouth Activities Complex for Kids).

The family of Russell "Rus" Harry Nielsen created this Life Tributes page to make it easy to share your memories.