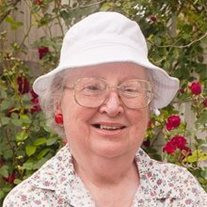 RUTH ANN MARKER 1932 - 2015 Ruth Ann (Hendrix) Marker age 83 of Plattsmouth, NE passed away on Monday, October 12, 2015 at her caregiver's residence in Plattsmouth. She was born on January 19, 1932 to Clifton William and Bernice Grace (Gambee) Hendrix in Turon, KS. She was raised and schooled in Maryville, IA and graduated from Westboro High School with the class of 1950. After graduating from high school, Ruth worked at Earl May in Shenandoah, IA. Then she worked as a nanny in Omaha, NE while putting herself through business school. After completing business school, she worked as the head secretary at Allied Chemical in La Platte, NE for five years. She met Harry Charles Marker and they were later married on April 13, 1957 at Grace Methodist Church in Omaha. Ruth and Harry made their home and raised their children in Plattsmouth. Ruth was a wife, homemaker, and stay at home mom. Later she worked as the cook at Happy Hearts Daycare for six years, then she worked part time at the Plattsmouth Garden Center, and as a waitress for two years all in Plattsmouth. Ruth was a member of First United Methodist Church, Lepert Wolever V.F.W. Post #2543 Auxiliary, and the Plattsmouth Garden Club all of Plattsmouth. She is survived by her husband: Harry Marker of Plattsmouth, NE, daughter: Bernita Zimmer and husband Steve of Plattsmouth, NE, granddaughter: Amber Wilkins and husband Ryan of La Vista, NE, grandson: Patrick Zimmer and fiancée Jessica Piatt of La Vista, NE, three sisters: Peggy Barnt of Ogallala, NE, Beth Wilson of Red Oak, IA, Lila Sue Wilkison of San Jose, CA, two brothers: Billy Hendrix and wife Leona of Sutherland, NE, Darrell Hendrix of Ogallala, NE, numerous nieces, nephews, cousins, and many friends. She was preceded in death by her: parents: Clifton and Bernice Hendrix, infant sister, brother: Martin Hendrix, and her son: Harold J. Marker. A Funeral Service will be held at 10:30 A.M., Thursday, October 15, 2015 at Roby Funeral Home in Plattsmouth with Pastor Lane Bailey officiating. Visitations will be held from 1:00 to 9:00 P.M., Wednesday, October 14, 2015 with the family greeting relatives and friends from 6:00 to 8:00 P.M. at Roby Funeral Home. Final Resting Place will be at Oak Hill Cemetery in Plattsmouth. The Pallbearers will be Ryan Wilkins, Patrick Zimmer, Rod Jenkins, James Carroll, Mike Hammonds, and Kendall Roby. Memorials to Lepert Wolever V.F.W. Post #2543 Auxiliary in Plattsmouth.

The family of Ruth Ann Marker created this Life Tributes page to make it easy to share your memories.

Send flowers to the Marker family.