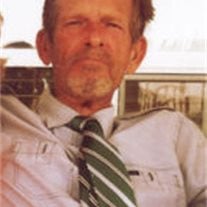 STANLEY RAYMOND BELZ 1948 – 2013 Stanley Raymond Belz Age 65 of Plattsmouth, NE passed away on Wednesday, December 25, 2013 at the Golden Living Center in Plattsmouth, NE. He was born on March 18, 1948 to Stanley Ernest and Dolores Emily (Villa) Belz in Merrick, New York. He was raised and schooled in Merrick, NY. Stanley studied art at the University of Colorado in Boulder, CO for one year and at Monterey Peninsula University in Monterey, CA for two years. Then he finished his art degree at Los Angeles College in Los Angeles, CA. Stanley's art work can be seen on Face Book under StanleyBelzArtist. Stanley made his home in Los Angeles for 28 years, where he was an Artist and sold his work. He moved to Omaha, NE in 2012 to live with his sister Cheryl. Then in January of 2013, due to his failing health, he made his home at Golden Living Center in Plattsmouth. Stanley was a member of Church of The Holy Spirit in Plattsmouth, NE. He is survived by his two sisters: Cheryl Belz & partner Mary Naprstek of Bellevue, NE, Kerry Summer & husband Rick of Atlanta, GA, two brothers: Cortland Belz & wife Linda of Tampa, FL, Ted Belz & wife Chris of Asheville, NC, three nephews: Kyle Belz & wife Jennifer of Tampa, FL, Curtis Belz of Miami Beach, FL, Matthew Belz of Tampa, FL, two nieces: Emily Belz of Miami, FL, Molly Belz of Tampa, FL, great niece: Elizabeth Belz of Tampa, FL, and numerous cousins and friends. Stanley is preceded in death by his parents: Stanley and Dolores Belz. A Memorial Mass will be held at 10:30 A.M., Friday, January 3, 2014 at Church of The Holy Spirit in Plattsmouth, NE with Father Loras K. Grell officiating. A private family burial will be at a later date at Plainview Cemetery in Plainview, NE. In lieu of flowers, memorials should be sent to the Golden Living Center, 602 S. 18th St., Plattsmouth, NE 68048, for the Stanley Belz Memorial Fund and/or for Masses in Stanley's name.

The family of Stanley Raymond Belz created this Life Tributes page to make it easy to share your memories.

Send flowers to the Belz family.