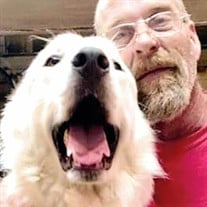 STANLEY ROGER HUBER 1962 - 2018 Stanley “Stan” Roger Huber age 56 of Plattsmouth, NE passed away on Thursday, October 25, 2018 at his residence. Stanley was born on August 14, 1962 to John Gary and Joan Evelyn (Olson) Huber in Cando, ND. He attended school in several different Midwest towns, as his Father was a baker with HyVee Food Stores. He attended school in Brookings, SD, Grand Forks, ND, Iowa Falls, IA, until settling in Maryville, MO where he graduated from Maryville High School with the class of 1980. Stan enlisted in the U.S. Army and serving his country for two years. Stanley used the skills he learned in the Army to support himself as a carpenter and a concrete mason. He and Amy Louise Gilbert were united in marriage in Maryville, MO and to this union two daughters were born. After he and Amy parted ways Stan moved to the Bellevue, NE area. He met and later married Tina Smith. Stanley and Tina made their home in Murray, NE and later Plattsmouth until he and Tina dissolved their marriage. Stanley continued to reside in Plattsmouth until he passed away. Stan is survived by two daughters: Champagne Murphy and husband Kyle of Spring Valley, MN; Bobbie Huber of Maryville, MO: eight grandchildren: Tucker, Tessa, Trisha, Kyle, Ethan, and Evan Murphy, Tyson and Dallas Pilgrim; father: John G. Huber of Liberty, MO; mother: Joan E. Huber of Kansas City, MO: brother: Troy Huber and wife Deb of Liberty, MO; two sisters: Teri Huber-Emery of Kansas City, MO; Tammy Larson and husband John of Papillion, NE; numerous, nieces, nephews, cousins, relatives, and many friends. Visitations will be held from 5:00 to 8:00 P.M., Tuesday, October 30, 2018 with a Celebration of Life at 6:00 P.M. at Roby Funeral Home in Plattsmouth. In lieu of flowers, Memorials to the Family (A suitable charity will be chosen at a later date). Services are entrusted to Roby Funeral Home, 346 Ave. A, Plattsmouth, NE 68048 (402) 296-3123 robyfuneralhome.com

The family of Stanley Roger Huber created this Life Tributes page to make it easy to share your memories.

Send flowers to the Huber family.