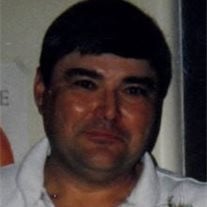 STEPHEN ALLEN ZIMMERMAN 1954 – 2017 Stephen "Steve" Allen Zimmerman age 62 of Plattsmouth, NE peacefully passed away on Saturday, April 29, 2017 at Nebraska Medicine in Bellevue, NE. Steve was born on September 17, 1954 to Chris Fred and Kathryn Elizabeth (Tschirren) Zimmerman in Nebraska City, NE. He was raised and schooled in Plattsmouth and graduated from Plattsmouth High School with the class on 1972. Steve worked as a truck driver, but he also was a co-owner of a grain elevator, a cafe, and a convenience store in Weeping Water, NE. He had lived in Weeping Water, Elmwood, NE; Lincoln, NE; Burr, NE; and Plattsmouth. He was a member of St. Paul's United Church of Christ of Plattsmouth. Steve is survived by son: Anthony Zimmerman of Lincoln, NE; daughter: Tamya Zimmerman of Lincoln, NE; three sisters: Cindy Ballinger and husband Ron of Plattsmouth, NE; Debbie Bagwell of Omaha, NE; Janet Zimmerman of Omaha, NE; numerous nieces, nephews, cousins, and many friends. He is preceded in death by his parents: Chris and Kathryn Zimmerman and his sister: Patty Penke. A Celebration of Life Gathering will be held from 11:00 A.M. to 4:00 P.M., on Sunday, May 21, 2017 at the Hopper Community Center in Weeping Water, NE. Memorials to Family (A suitable charity will be chosen at a later date).

The family of Stephen "Steve" Allen Zimmerman created this Life Tributes page to make it easy to share your memories.