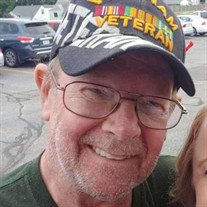 STEVEN ALBERT ZWEIBAHMER 1948 – 2020 Steven “Steve” Albert Zweibahmer, age 72 of Plattsmouth, NE entered into eternal rest on Thursday, September 17, 2020 at his daughter’s residence in Papillion, NE. He was born on August 1, 1948 to Albert Clarence and Doris Elaine (Warthan) Zweibahmer in West Union, IA. He was raised and schooled in Calmar, IA graduating from South Winneshiek High School with the class of 1966. After graduating, he enlisted in the U.S. Air Force. He was stationed in Spain, Albuquerque, NM, San Antonio, TX, retiring in 1992 at Offutt Air Force Base in Bellevue, NE. While stationed in Spain, Steve met the love of his life Susan Joan Watson. Steve and Susan were later married on October 18, 1969 at St. Aloysius Catholic Church in Calmar. Steve was stationed in Vietnam for a year retiring from the Air Force in 1970. He began taking classes at the University of Albuquerque where he reenlisted in the Air Force in 1972. He earned his Bachelor’s degree in Business Administration then moved to San Antonio, TX. In 1985, Steve and Susan settled in Plattsmouth where they made their home and raised their children. After retirement, Steve, aka Mr. Z, loved being a part of the community. His time owning Mr. Z’s Video Store brought him much joy as he made long lasting relationships with everyone who entered. Steve was a member of the Church of the Holy Spirit, Knights of Columbus Father Shine Council #1966, Lepert Wolever V.F.W. Post #2543, and Fraternal Order of Eagles Aerie #365 all of Plattsmouth. He is survived by his wife: Susan Zweibahmer of Plattsmouth, NE; three daughters: Shelley Stempek and husband Trent of Duncan, NE; Sabrina Parriott of Plattsmouth, NE; Stephanie Balwanz and husband Steven of Papillion, NE; seven grandchildren: Cassandra, Kade, Sienna, Trey, Teegan, Tabbi, and Trevan; two brothers: Edward Zweibahmer and wife Karen of Michigan City, IN; David Zweibahmer and wife Robin of Calmar, IA; his sister: Bonnie Shippy and husband James of Dubuque, IA; numerous nieces, nephews, cousins, and many friends. Steve is preceded in death by his parents: Albert and Doris Zweibahmer. A Visitation will be held from 1:00 P.M. to 5:00 P.M. on Monday, September 21, 2020 at Roby Funeral Home in Plattsmouth. Visitations will resume at 6:00 P.M., Monday, September 21, 2020 at the Church of the Holy Spirit in Plattsmouth with a Rosary at 7:00 P.M. A Funeral Mass will be held at 10:00 A.M., on Tuesday, September 22, 2020 at Church of the Holy Spirit with Father Michael Houlihan officiating and Terry Little as vocalist. *Covid 19 guidelines will be followed at the mortuary and church.* The Pallbearers will be Steve Balwanz, Kade Parriott, Jake Shippy, Josh Shippy, Teegan Stempek, Trent Stempek, and Trey Stempek. Military Rites will be conducted by the Offutt Air Force Base Military Rites Team of Bellevue. His Final Resting Place will be at Omaha National Cemetery in Omaha at 2:00 P.M., Tuesday, September 22, 2020. The Family suggests Memorials for Masses or to the Family (A suitable charity will be chosen at a later date). Services Entrusted to Roby Funeral Home, 346 Ave. A, Plattsmouth, NE 68048 (402) 296-3123 robyfuneralhome.com

The family of Steven Albert Zweibahmer created this Life Tributes page to make it easy to share your memories.

Send flowers to the Zweibahmer family.