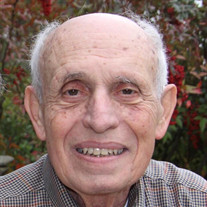 THOMAS CONIS 1935 - 2019 Thomas “Tom” Conis age 84 of Simpsonville, SC passed away on Friday, April 26, 2018, at NHC Mauldin in Simpsonville. He was born on February 18, 1935, to George and Papina (Papanicolaou) Conis in Omaha, NE. Tom was raised on Main Street in Plattsmouth, where his parents owned Conis Shine Parlor, where they shined shoes, cleaned hats, and sold candy and ice cream. He graduated from Plattsmouth High School in 1953 and from the University of Nebraska in 1957. He married Evelyn Henry, also raised in Plattsmouth, on June 16, 1957. He was active Navy from 1957 until 1959, and they were stationed in San Diego and San Francisco. Tom graduated from Creighton Law School in 1962. He was in private practice in Plattsmouth before working for Fairmont Foods in Omaha from 1964 to 1974. He was also a police judge in Plattsmouth during these times. The family then moved to Menasha, WI, where Tom worked for Kimberly-Clark from 1974 to 1997. They moved to Alpharetta, GA in 1984 where Tom was the head of the legal department at KC’s Roswell, GA office, and moved back to Appleton, WI in 1994 where Tom helped with the merger of Scott Paper and KC. Upon retirement from KC in 1997, Tom and Evelyn moved to Roswell, GA. They moved to Hendersonville, NC in 2015 and to Simpsonville, SC in 2018. Tom was very proud of growing up in Nebraska and attending the University. Wherever and whenever he was, if he saw someone in a Nebraska shirt, he would introduce himself and strike up a conversation about Nebraska. He took up running in his 40s, and ran 26 consecutive Peachtree Road Races on the 4th of July in Atlanta. He was also an avid tennis player throughout his adult life, playing until 2017. Their house in Roswell had its own tennis court, where the family would have their own “Havenwood Tennis Classic” tournament, complete with trophies. Tom was also proud of his children and grandchildren. Tom and Evelyn rarely missed a school or sporting event that their children had or later their grandchildren who lived nearby had. Later in life, he suffered from dementia, but he could still tell you from where all his children and his 5 oldest grandsons graduated college and what they did for a living. Tom is survived by his wife Evelyn of Simpsonville, SC; his son Tom of Wauwatosa, WI; his daughter Chris Carnot and husband Al of Simpsonville, SC; his daughter Connie Wick and husband Dave of Nashotah, WI; his daughter Stephanie Gauthier and husband Eddie of Sammamish, WA; 7 grandsons: Michael Carnot, Tom Carnot and his wife Fatima, Tyler Wick and his girlfriend Marie Johnson, Peter Conis and his girlfriend Erin Look, Ryan Wick, Matthew Gauthier and Nicholas Gauthier; 2 great grandsons: Jibreel and Ibrahim Carnot; sister-in-law Rae Mae Fulton and her husband David of Columbus, NE; nephew Tom Copmann and wife Kathy of Estero, FL; nephew Peter Conis and his wife Barb of Ames, IA; special Greek cousins; Henry family relatives; and numerous friends. He was preceded in death by his parents George and Papina Conis, his sister Catherine Copmann, and his brother John Conis. A Visitation will be held on Thursday, May 2, 2019 from noon to 2 P.M. at Roby Funeral Home in Plattsmouth. The Memorial Service will be held immediately after visitation at 2 P.M. at Roby Funeral Home. The pallbearers will be his seven grandsons. His Final Resting Place will be at Oak Hill Cemetery in Plattsmouth. The family suggests memorials to American Cancer Society, as Tom was a prostate and skin cancer survivor and his daughter Stephanie is a breast cancer survivor. Services are entrusted to Roby Funeral Home, 346 Ave. A, Plattsmouth, NE 68048 (402) 296-3123 robyfuneralhome.com

The family of Thomas Conis created this Life Tributes page to make it easy to share your memories.

Send flowers to the Conis family.