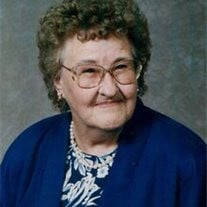 VERDA MARIE LIDDICK 1924 - 2014 Verda Marie (Stapleton) Liddick age 90 of La Platte, Nebraska passed away on Monday, March 31, 2014 at the Bellevue Medical Center in Bellevue, NE. Verda was born on January 21, 1924 to Kyle and Maude Carrie (Kinnan) Stapleton in Carroll, IA. When Verda was six years old, she moved with her family to La Platte, NE were she was raised and schooled. She met the love of her life, Ralph Eugene Liddick and they were later married on March 14, 1942 in Plattsmouth, NE. Verda was a wife, mother, and homemaker. She worked part-time at Skelton Cafe and Tavern (now known as The Lodge), and in 1974 she began working as a janitor for School District 46 until she retired in 1989. Verda had lived in La Platte for eighty-four years. She is survived by her daughter: Penny Morin of La Platte, NE, granddaughter: Angela Morin of La Platte, NE, great grandson: Jacob Morin of La Platte, NE, and numerous nieces, nephews, cousins, and many friends. She was preceded in death by her parents: Kyle and Maude Stapleton, husband: Ralph Liddick, brother: Paul Stapleton, and two sisters: Leota Porter and Mildred Legore. A Funeral Service will be held at 10:30 A.M., Friday, April 4, 2014 at Roby Funeral Home in Plattsmouth, NE with Pastor Michael Lincoln officiating. Visitations will be held from 1:00 – 9:00 P.M., Thursday, April 3, 2014 with family greeting relatives and friends from 6:00 – 8:00 P.M. at Roby Funeral Home. Interment will be at La Platte Cemetery in La Platte, NE. Pallbearers will be Larry Legore, Jacob Morin, George Porter, Ty Porter, Dennis Smith, and Roger Winters. Honorary Pallbearers will be Lyle Hild and John Porter. The family suggests memorials to La Platte Cemetery in La Platte, NE.

The family of Verda Marie Liddick created this Life Tributes page to make it easy to share your memories.

Send flowers to the Liddick family.