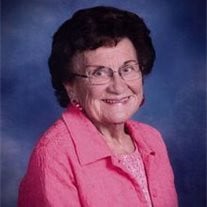 VERONA THERESA PETEREIT 1924 – 2017 Verona Theresa (Toman) Petereit age 93 of Plattsmouth, NE passed away on Tuesday, April 4, 2017 at Nebraska Medicine – Bellevue in Bellevue, NE. She was born on February 4, 1924 to John Hubert and Theresa Mary Magdalene (Sedlak) Toman in Plattsmouth. Verona was raised and schooled in Plattsmouth and graduated from Plattsmouth High School with the class of 1941. After graduating from high school, she worked as an executive secretary at the Martin Bomber Plant at Offutt Air Force Base in Bellevue, NE. Verona married her high school sweetheart, Marvin Otto Petereit on May 21, 1943 at St. John the Baptist Catholic Church in Plattsmouth. Verona and Marvin made their home and raised their four children on their farm in rural Plattsmouth. Verona was a member of the Church of the Holy Spirit, Catholic Daughters of Americas, PCCW (Parish Council of Catholic Women), and the Cullom Extension Club. She is survived by her two daughters: Susan Dellinger and husband Edward of Plattsmouth, NE; Janet Toman and husband Charles of Naperville, IL; son: Kurt Petereit of Plattsmouth, NE; daughter-in-law: Patricia Petereit of Weeping Water, NE; ten grandchildren; nine great grandchildren; numerous nieces, nephews, cousins, and many friends. She was preceded in death by her parents: John and Theresa Toman, husband: Marvin Petereit, son: Dennis Petereit, and her brother: Raphael Toman. Visitations will be held from 1:00 to 5:00 P.M., with the family receiving relatives and friends from 3:00 to 5:00 P.M., Tuesday, April 11, 2017 at Roby Funeral Home in Plattsmouth. A Rosary Service will be held at 7:00 P.M., Tuesday, April 11, 2017 at the Church of the Holy Spirit in Plattsmouth. A Funeral Mass will be held at 10:00 A.M., Wednesday, April 12, 2017 at the Church of the Holy Spirit with Father David Azambawu officiating, Lowell Daisley and Lynn Vinduska as acolytes, Joy Scanlan as lector, Terry Little as vocalist, and Laurie Hajek-Jones as organist. The Pallbearers will be Gregg Eisenbarth, Dennis Heim, Mark Meisinger, Roger Schmidt, Bill Starkjohn, and David Wehrbein. The Honorary Pallbearers will be Duane Heim, Rob Meisinger, Wayne Meisinger, Roger Wehrbein, Ted Wehrbein, Marvin Wiles, and Members of the Cullom Extension Club. Her Final Resting Place will be next to her husband Marvin at Oak Hill Cemetery in Plattsmouth. The family suggests Memorials for Masses at Church of the Holy Spirit, Plattsmouth Firefighters Association, or Plattsmouth Public Library.

The family of Verona Theresa Petereit created this Life Tributes page to make it easy to share your memories.

Send flowers to the Petereit family.