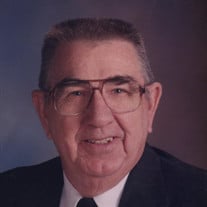 WALTER ALBERT EBELER SR. 1927 – 2019 Walter Albert Ebeler Sr. age 91 of Louisville, NE peacefully passed away on Wednesday, February 27, 2019 at the Louisville Care Center. He was born on August 12, 1927 to Arthur Henry and Elsie Christina (Doeden) Ebeler in Syracuse, NE. Walter was raised and schooled in Syracuse and Auburn, NE. He graduated from Auburn High School with the class of 1945. He met Mary Lucille Marchand and they were later married on December 27, 1946 in Hiawatha, KS. He enlisted in the U.S. Army and served his country for one year during WWII from 1946 to 1947. After serving his country, Walter and Mary made their home and raised their children in Walthill, NE. He worked for the U.S.D.A. Soil Conservation Service as a Soil Conversation Technician for thirty seven years in the Walthill and Madison offices, until he retired in 1984. In 2006, Walter moved to the Louisville Care Center. Walter was a volunteer fireman in Walthill and Madison for forty seven years and had served as fire chief of both departments. He was a Nebraska State Certified Fire Instructor and Walter was a member and a past president of the Nebraska State Volunteer Firefighters Association. Walter was the recipient of numerous firefighters meritorious service awards at the local and state levels. He also received many community service awards including the Knights of Ak-Sar-Ben Good Neighbor Award. He is survived by his two daughters: Diana Ingwerson and husband James of Plattsmouth, NE; Linda Renken of Remsen, IA; son: Walter Ebeler Jr. and wife P.J. of Millard, NE; eleven grandchildren; twenty one great grandchildren; three great great grandchildren; two brothers: Marvin Ebeler of Auburn, NE; David Ebeler and wife Sharon of Silt, CO; sister: Velma Peterson and husband Daryl of Stanton, IA; sister in law: Charlene Marchand of Papillion, NE; numerous nieces, nephews, cousins, and many friends. Walter was preceded in death by his parents: Arthur and Elsie Ebeler, wife: Mary Ebeler, grandson: Timothy Ebeler, three brothers: Pete, Wesley, and Arthur Ebeler, and two sisters: Arlene Schade and Ruth Smith. A Visitation will be held from 4:00 to 6:00 P.M., on Sunday, March 3, 2019 at Roby Funeral Home in Plattsmouth. The Funeral Service will be held at 10:30 A.M., Monday, March 4, 2019 at First Presbyterian Church with Pastor Matthew Coplen officiating and Carol Wehrbein as organist. The Pallbearers will be Albert Ebeler, Ian Ebeler, Nathan Ingwerson, Shawn Renken, Drake Turner, and Shannon Turner. Military Rites will be conducted by the Nebraska Army National Guard, Military Funeral Honor Guard. Final Resting Place will be at LaFayette Cemetery in rural Brock, NE. Memorials to the Alzheimer's Association. Services are entrusted to Roby Funeral Home, 346 Ave. A, Plattsmouth, NE 68048 (402) 296-3123, robyfuneralhome.com.

The family of Walter Albert Ebeler Sr. created this Life Tributes page to make it easy to share your memories.

Send flowers to the Ebeler family.