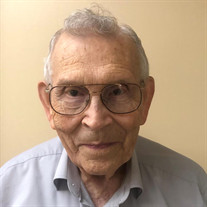 WARREN EDWARD STENBACK 1921 – 2021 Warren Edward Stenback age 95 of Plattsmouth, NE passed away on Wednesday, December 22, 2021 at the Nebraska Medical Center in Omaha, NE. Warren was born on April 18, 1926 to Chris and Mabel Elenanor (Christensen) Stenback in Brush, CO. He was raised and schooled in Brush and he graduated from Brush High School with the class of 1944. Warren enlisted in the U.S. Army and he proudly served his country for two years during the WWII. He was stationed overseas in the Netherland and Germany. He returned to Brush, where he worked for a year before starting classes at Dana College in Blair, NE. Warren earned his Bachelor’s Degree in Counseling and then he began working for the Nebraska Department of Labor. While working for the Nebraska Department of Labor, he earned his Master’s Degree in Counseling and he worked in Norfolk, North Platte, and Kearney, NE. He met Joanne Marie Stroud and they later married on March 30, 1957 at First Presbyterian Church in Kearney. Warren and Joanne made their home in Kearney. Warren retired on July 30, 1982 and they moved to Russellville, AR in February of 1983. Later Warren and Joanne moved to The Nebraska Masonic Home in Plattsmouth on July 1, 2019. He is survived by three cousins and many friends. Warren is preceded in death by his parents: Chris and Mabel Stenback and his wife: Joanne Stenback. Visitations will be held from 10:00 A.M. to 11:00 A.M., on Wednesday, December 29, 2021 at Roby Funeral Home in Plattsmouth. A Funeral Service will be held at 11:00 A.M., Wednesday, December 29, 2021 at Roby Funeral Home with Pastor Chris Abbott officiating. His Final Resting Place will be at Oak Hill Cemetery in Plattsmouth. Memorials to The Nebraska Masonic Home in Plattsmouth. Services are entrusted to Roby Funeral Home, 346 Avenue A, Plattsmouth, NE 68048 (402) 296-3123 [email protected] www.robyfuneralhome.com

The family of Warren Edward Stenback created this Life Tributes page to make it easy to share your memories.

Send flowers to the Stenback family.