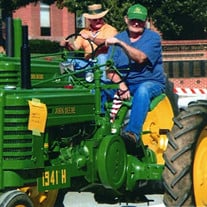 WENDELL ALLEN RINNER 1944 – 2020 Wendell Allen Rinner, age 75 of Plattsmouth, NE passed away on Wednesday, February 5, 2020 at Alegent Midlands Community Hospital in Papillion, NE. He was born on July 15, 1944 to Archie Galen and Thelma Irene (Henderson) Rinner in Osceola, IA. Wendell was raised and schooled in the Murray, IA area and he graduated from Murray High School with the class of 1962. Wendell met Carol Joyce Glazebrook in high school and they were married on June 30, 1962 in Murray. He worked at a Ford dealership and on a farm near Creston, IA. Wendell and Carol moved to Plattsmouth where they made their home and raised their children. Wendell worked for Wilson Concrete, for Gary Workman as a plumber, for Tom Collier hauling milk for ten years, and then he worked at Plattsmouth Ready Mix until he retired in 2008. Wendell is survived by his wife: Carol Rinner of Plattsmouth, NE; two sons: Rick Rinner and wife Debra of La Vista, NE; Rodney Rinner and wife Tracy of Plattsmouth, NE; four grandchildren: Rachel, Jacob, and Robert Rinner, and Matthew Leaper; his brother: Merrill Rinner and wife Diana of Osceola, IA; and numerous nieces, nephews, cousins, and many friends. He is preceded in death by his parents: Archie and Thelma Rinner and three brothers: Daryl, Guy, and Terry Rinner. Visitations for Wendell will be from 1-9 P.M., with the family present from 6-8 P.M., on Friday February 7, 2020, at Roby Funeral Home in Plattsmouth. A Funeral Service will be held at 11:00 A.M., Saturday, February 8, 2020 at Roby Funeral Home Chapel with Pastor Michael Lincoln officiating. The Pallbearers will be Craig Lineweaver, James Lineweaver, Jim Oaks, Dan Rinner, Jacob Rinner, Rick Rinner, Robert Rinner, and Rodney Rinner. The Honorary Pallbearer will be Larry Jensen. His Final Resting Place will be at Pleasant Ridge Cemetery in Plattsmouth. The family suggests Memorials to the Alzheimer's Association. Services Entrusted to Roby Funeral Home, 346 Ave. A, Plattsmouth, NE 68048 (402) 296-3123 robyfuneralhome.com

The family of Wendell Allen Rinner created this Life Tributes page to make it easy to share your memories.

Send flowers to the Rinner family.