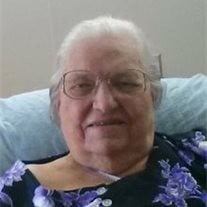 WILMA ANNA PULS 1919 - 2015 Wilma Anna (Friedrich) Puls age 95 of Plattsmouth, NE passed away on Wednesday, January 14, 2015 at the Nebraska Masonic Home in Plattsmouth. Wilma was born on August 22, 1919 to Louis and Emma Elizabeth (Hild) Friedrich at her parent's farm house in rural Louisville, NE. She was raised and schooled in rural Louisville and graduated from Plattsmouth High School with the class of 1936. She met Joseph Philip Charles Puls and they were later married on February 6, 1944 at her parents' home. She was an active mother, homemaker, and a faithful "gofer" for her husband Joe. Wilma lived her entire life on the farm until Joe passed away in 1992, when she moved to an apartment in Plattsmouth. As her health failed, she moved to Woodbridge Assisted Living and later to the Nebraska Masonic Home. She was an active lifelong member of Christ Lutheran Church in rural Louisville, NE and was baptized, confirmed, married, and now buried in the Lutheran faith. Wilma taught Sunday School, was a member of the church choir, the Ladies Aid, L.C.W., and the custodian at the church for many years. Wilma was a charter member of Job's Daughter Bethel #24, a member of Order of Eastern Star Home Chapter #189 both of Plattsmouth, Fairview Womens Club, and many card clubs. She is survived by her daughter: Joyce Bishop and husband Richard of Plattsmouth, NE, three sons: Ronald Puls and wife Shirley of Omaha, NE, Delbert Puls and wife Diana of Murray, NE, Brad Puls and wife Paula of Charlotte, NC, nine grandchildren, eleven great grandchildren, numerous nieces, nephews, cousins, and many friends. She was preceded in death by her parents: Louis and Emma Friedrich, husband: Joseph Puls, brother: Verner Friedrich, two sisters: Hilda Kraeger, Malinda Schafer, and granddaughter: April Bishop. A Funeral Service will be held at 10:30 A.M., Tuesday, January 20, 2015 at Christ Lutheran Church in rural Louisville, NE with Pastor Emily Johnson officiating and Jacke Franke as organist. An Eastern Star Service will be held at 7:00 P.M., on Monday, January 19, 2015 at Roby Funeral Home in Plattsmouth. Visitation will be held from 1:00 to 9:00 P.M., with family greeting relatives and friends from 6:00 to 8:00 P.M., Monday, January 19, 2015 at Roby Funeral Home. The Pallbearers will be Dustin Puls, Lane Puls, Evan Puls, Derek Puls, Bruce Kraeger, Buck Meisinger, Colin Keierleber, and Brian DeSalle. Final Resting Place will be at Oak Hill Cemetery in Plattsmouth, NE. The family suggests memorials to Christ Lutheran Church in Louisville.

The family of Wilma Anna Puls created this Life Tributes page to make it easy to share your memories.

Send flowers to the Puls family.