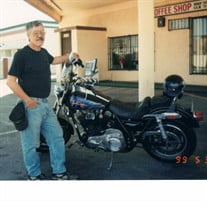 WOLFGANG JOSEPH LIEDTKE 1947 – 2020 Wolfgang Joseph Liedtke, age 72 of Omaha, NE peacefully passed away on Friday, April 10, 2020 at his home. He was born on November 17, 1947 to Paul John and Hilda Adolfine (Von Darl) Liedtke in Gelsenkirchen, Germany. When Wolfgang was two years old he moved with his family to Plattsmouth, NE. He was raised and schooled in Plattsmouth and he graduated from Plattsmouth High School with the class of 1965. After graduating from high school, Wolfgang started his career as a welder. Wolfgang met Sharon Vanice Johnson and they were later married on March 25, 1972 in Omaha. Wolfgang and Sharon lived in Las Vegas, NV from 1986 until 2008 when they moved back to Omaha. Wolfgang is survived by his wife: Sharon Liedtke of Omaha, NE; two daughters: Sharon Dolezal and husband Bob of Omaha, NE; Tina Willis and husband Erick of Las Vegas, NV; five grandchildren: Adrian Willis, T-Aira Chambers, Christopher Willis, Aricha Willis, and Billy Dolezal; three great grandchildren: Halina Willis, Adrian Willis Jr., and Tancred Willis; his brother: Richard Liedtke and wife Theresa of Omaha, NE; numerous nieces, nephews, cousins, and many friends. He was preceded in death by his parents: Paul and Hilda Liedtke and his granddaughter: Mariah Henry. A Visitation will be held from 1:00 to 2:00 P.M., Wednesday, April 15, 2020 at Roby Funeral Home, prior to graveside service. A Private Family Graveside Service will be held at 2:00 P.M., on Wednesday, April 15, 2020 at Holy Sepulchre Cemetery in Plattsmouth. Memorials to the Family (A suitable charity will be chosen at a later date). His Final Resting Place will be at Holy Sepulchre Cemetery in Plattsmouth. Services Entrusted to Roby Funeral Home, 346 Ave. A, Plattsmouth, NE 68048 (402) 296-3123 robyfuneralhome.com

The family of Wolfgang Joseph Liedtke created this Life Tributes page to make it easy to share your memories.

Send flowers to the Liedtke family.